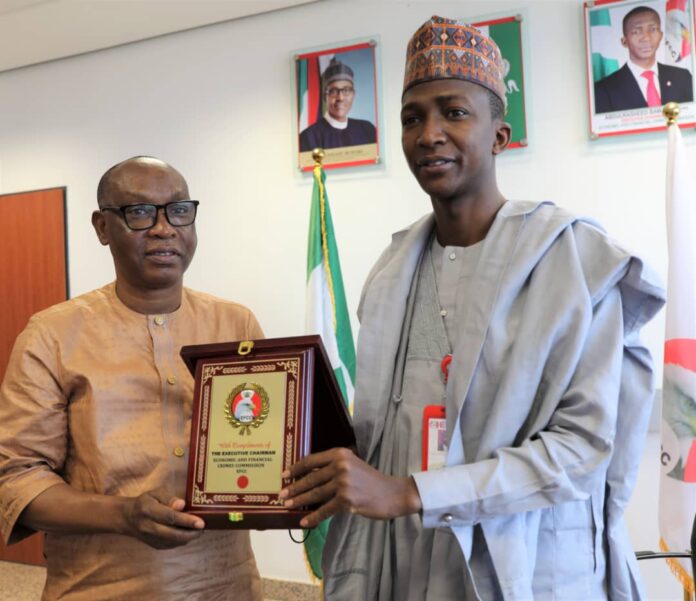 The Economic and Financial Crimes Commission EFCC, and the Nigeria Extractive Industries Transparency Initiative, NEITI, have  resolved to strengthen their collaboration in fighting corruption in the extractive sector to ensure full recovery of revenues due to the Federal Government.

The anti-graft Agency’s Executive Chairman, Abdulrasheed Bawa, while receiving the NEITI Executive Secretary, Dr. Orji Ogbonnaya Orji at the EFCC headquarters in Jabi, on Friday, 23rd April, tasked NEITI to leverage on the experience and capacity of the EFCC in the area of extractive industries fraud investigation so as to improve the delivery of her mandate.

TheFact Nigeria reports that, according to Bawa the Commission had successfully developed expertise in investigation in such areas as oil and gas, oil subsidy, oil swap, OML and OPL, which saw the recovery of billions of naira. “We can work together to ensure that what rightly belongs to Nigeria is ours”, he said.

He urged the Agency to take advantage of the Extractive Industries Fraud Section of the Commission, which was created exclusively to tackle fraud in the extractive sector.

“In 2012, the EFCC set up a special team for petroleum subsidy which I was part of, and at the end of our assignment, it was changed into a permanent section in the EFCC. It was changed from special team for petroleum subsidy to Extractive Industry Fraud Section, and the EFCC did not stop at that. We ensured that every Zone of the Commission has that section,” he said.

The EFCC boss further expressed his desire to have NEITI participate in a project on fraud risk assessment in the petroleum industry.

“We have engaged the minister of petroleum resources and we are working towards having a fraud risk assessment for the entire agencies under the ministry, and with that will come fraud risk management. I will discuss with the ministry that NEITI is a part of it. We have to do all we have to do to ensure that what is due to this country is paid into the coffers. With your help and information sharing, we can do this,” he said

Orji, in his remarks said he came to the EFCC to strengthen the existing relationship between the two agencies, noting that NEITI, since it was established, has been upfront in the discharge of its responsibilities, culminating in substantial improvement in revenue remittances in the oil and gas sector.

The NEITI chief added that in addition to improving revenue accruals to government, the Agency was instrumental to the coming on stream of the Petroleum Industries Bill. “PIB did not come from the blues. It was NEITI that recommended it.” He however noted with regret that the Bill has not been passed into law due to contending interests.

Orji further disclosed that NEITI is handicapped by the fact that it has no enforcement powers.

Furthermore, Orji observed that the two agencies have a memorandum of understanding, MoU, which was yet to be formalized. He requested that the document is signed by the agency heads and a special desk created for seamless relationship and information sharing.

Responding, Bawa said, with or without MoU, the EFCC was willing to strengthen its collaboration with NEITI. He however directed that immediate steps be taken to get the MoU signed.

The EFCC helmsman further offered to assist NEITI in building the capacity of its workforce with training opportunities at the EFCC Academy.