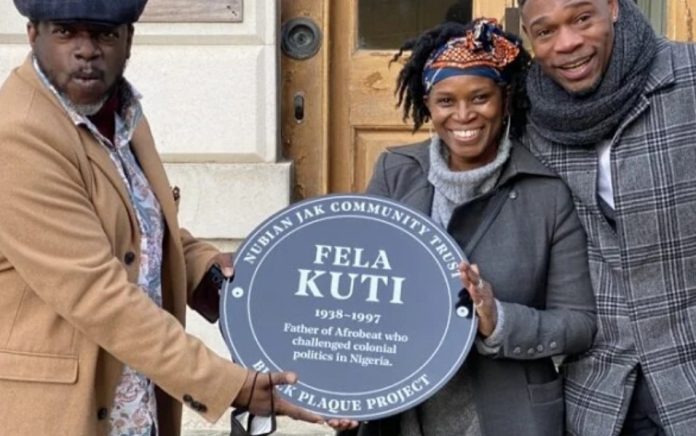 The Afrobeat pioneer was awarded by English Heritage, a charity that manages historic monuments.

The honourary blue plaque was mounted on 12 Stanlake Road residence at Shepherd’s Bush, a district of West London, where Fela lived the first time he came to the UK to study music.

The plaque read: “Fela Anikulapo Kuti(1938-1997), singer, multi-instrumentalist, composer and Nigerian activist. Lived in this house as a student in 1958.”

Fela left Nigeria for London in 1958 to study medicine but switched to the Trinity College of Music.

Late Fela joins the list of other notable entertainers honoured by the English Heritage.

The list includes Bob Marley, the late Jamaican singer, who was honoured with a blue plaque on the house where he and The Wailers finished recording the album ‘Exodus’.

Also honoured was Jimi Hendrix, the guitarist who became an overnight star with the release of his band’s 1966 single ‘Hey Joe’.

The English Heritage stated that the blue plaques link the people of the past with the buildings of the present.

Covid-19: Only 27% Of African Health Workers Fully Vaccinated- WHO

Covid-19: Nigeria gets UNCTAD’s thumbs up for protection against price gouge