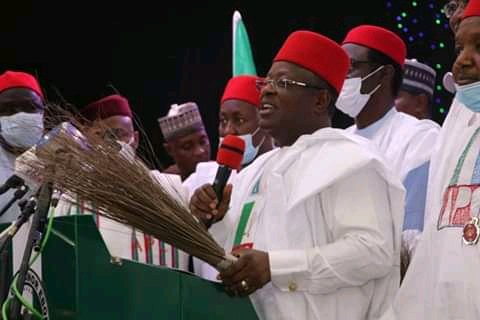 The Association of Ebonyi State Indigenes in Diaspora (AESID) has called on the Ebonyi State House of Assembly to begin an impeachment process against Governor David Umahi over his defection to the All progressive Congress (APC).

Recall Governor Umahi defected to the APC from the opposition Peoples Democratic Party (PDP) a couple of days ago over his alleged injustice metted on the South East by the PDP.

Ambassador Oluchukwu Paschal the AESID president general made this known on Sunday, In a statement made available to newsmen in Abuja where he revealed that Umahi following his defection has already committed “a substantial breach of the Nigerian constitution and subsisting Supreme Court verdicts which insist that a governor cannot defect to another political party unless there is internal leadership crises, perhaps leading to factionalization in his own political party.”

He said, “In view of the foregoing breaches of the fundamental rights of citizens of our dear State therefore and the potentialities of same to plunge Ebonyi into a serious political crises (a threat we had foresaw and consistently cautioned Governor Umahi about), AESID boldly urge Ebonyi lawmakers to immidiately commence impeachment proceedings against the Governor. We make this call due to our believe and understanding of Umahi as a brutal dictator who is ready to set our dear state on fire in pursuit of his ego-laced selfish interests.

“Finally, like we have always reiterated, Ebonyi belongs to all of us and one man’s personal ambition and interest cannot plunge the rest of the State which our fore-fathers laboured for many years to have into crises of monumental proportion. Ebonyi cannot be set aflame simply because Governor Umahi wants to protect his wealth belonging to Ebonyi people with the pretence of running for the highest office in the land.”

The group condemned in its totality and take a proper swipe at Governor Umahi for his subtle threats to his appointees and the State legislators including the suspension of Hon. Victor Aleke from the State’s House of Assembly for keeping fate with the mandate given him by his people of Ebonyi North-west constituency.

“It has become obvious to us and every discerning mind that Umahi is deliberately creating the crises in PDP through Barr. Nwebonyi in order for some of the State lawmakers to have a fertile ground to defect with him in the guise of cracks, factions or crises in Ebonyi PDP.

The rest is his statement reads, “We thank the National leadership of the PDP for acting rightly by dissolving the Umahi-dominated Wards, Local Governments, State and zonal Executives of the Party and constituting a Care-Taker Committee made of men who are capable of righting the many wrongs and injustices done by the quondam Excos.

“We hereby charge the newly-constituted Care-Taker leadership of the PDP in Ebonyi State to ensure it pilot the affairs of the party with all due diligence and sincerity of purpose capable of returning power to the power as was the case before the despotic era of Umahi and the Umahis.

“Already, we are aware of the distractions which the disbanded Nwebonyi-led Excos pose to the new Care-Takership and indeed, the common Party faithfuls in the State as they have made themselves willing tools in the hands of Umahi and the Umahis to cause, confusion, disaffection and disunity in Ebonyi PDP. We say this in lieu of the purported notice of suspension of notable leaders and elderstatesmen of our great Party by the defunct Excos some of who have continued to make themselves available pun in Umahi’s political Chessboard.”

“For us in AESID, his defection is only a manifestation of his true character personae- an ingrate, a traitor and a betrayer all combined into one. This is why we, and indeed majority of sincere people in the South East region find it absolutely benumbing the claim by Governor Umahi that he is protesting against the injustices meted out to the South-East, hence, his defection to the APC.

“We only wish to reiterate that his eventual decamping to the APC therefore has further exposed his known penchance for pretences and hypocrisy, greed and insatiable lust for power. The rest of Nigerians can therefore now see that going by his recent vituperations of calling elders his ‘children’, Umahi is a brutal dictator who has no respect, honour and dignity for the next human around him except to use men and women like unserviceable ‘machines’ during the industrial age.”

Liquorose Set To Publish Book Written While In BBNaija Isolation