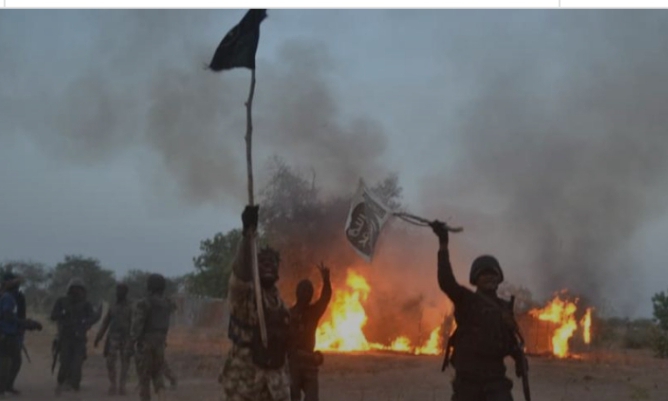 Nigerian troops, in continuation of the war on insurgency in the North east, are extending their offensive against the Boko Haram Terrorists (BHTs) in the Sambisa Forest general areas.

This was achieved by troops of Sector 1 of Operation LAFIYA DOLE, comprising troops of 21 and 26 Brigades, supported by Multi National Joint Task Force troops, under the auspices of Operation TURA TAKAIBANGO from their base, in Bama, Borno State.

The relentless efforts of the troops has led to the neutralization of several Boko Haram terrorists and destroyed their camps in the ongoing operations.

TheFact Nigeria learnt that Garin Bello, Kwoxhe, Lawanti, Alfa Bula Hassan and Alfa Cross, among others, are some of the enclaves cleared along the troops’ axis of advance.

It was also gathered that, though troops encountered stiff resistance from the terrorists who also laid improvised explosive devices along the troops axis of advance, they gallantly Neutralized several of the terrorists, destroyed their camps, and recovered gun trucks and equipment.

This was made possible through the provision of close sir and interdiction support from the Air Task Force of Operation LAYIYA DOLE to the ground forces in the renewed offensive synergy by the forces.

It is interesting to note that a young lady and some children were rescued in one of the villages during the clearance operations.

Regrettably, however, one soldier paid the supreme price while four others were wounded when an improvised explosive device went off.

The deceased soldier and the wounded have all been evacuated to a military facility, in Maiduguri.

Theatre Commander, Operation Lafiya Dole, Maj. Gen Farouk Yahaya, in a message to the troops on behalf of the Chief of Army Staff, Maj.-Gen. Ibrahim Attahiru, praised the gallantry of the troops and urged them to sustain it.
Gen. Yahaya also ordered the soldiers to be ruthless and be very professional against the terrorists called Boko Haram.

He passed the commendation of the Chief of Army Staff even as he demanded more from them, and also paid tribute to the fallen hero, urging the troops to honour his memory by finishing off the Boko Haram criminals once and for all.