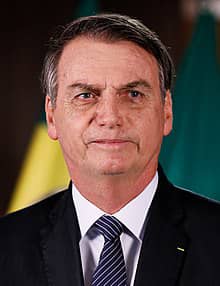 A Brazilian court has ordered President Jair Bolsonaro to pay compensation to a journalist after he made degrading comments about her.

Mr Bolsonaro had suggested last year that Patrícia Campos Mello had offered sex to a source for negative information about him.

In a tweet, Ms Campos Mello, an award-winning reporter for Brazilian daily newspaper Folha de S.Paulo, said the judge’s decision was a “victory for all of us women”.

The Journalists Against Harassment group said the ruling marked a “great day” for female reporters and professional journalism in Brazil.

Mr Bolsonaro, a right-wing president who has been in office since January 2019, has a long-standing row with journalists who have been critical of his administration.

Ms Campos Mello brought legal action against him in response to comments made in February 2020.

In its report about the remarks, the Folha newspaper accused Mr Bolsonaro of insulting Ms Campos Mello with sexual innuendo.

Mr Bolsonaro said the journalist “wanted a scoop” at “any price against me”, the newspaper reported the president as saying.

He had suggested in a YouTube video last May that the reporter had “tried to seduce” a source for damaging information against his father.

A judge said the comments were an attack on the journalist’s honour, and ordered Mr Bolsonaro’s son to pay her 30,000 reais in compensation.