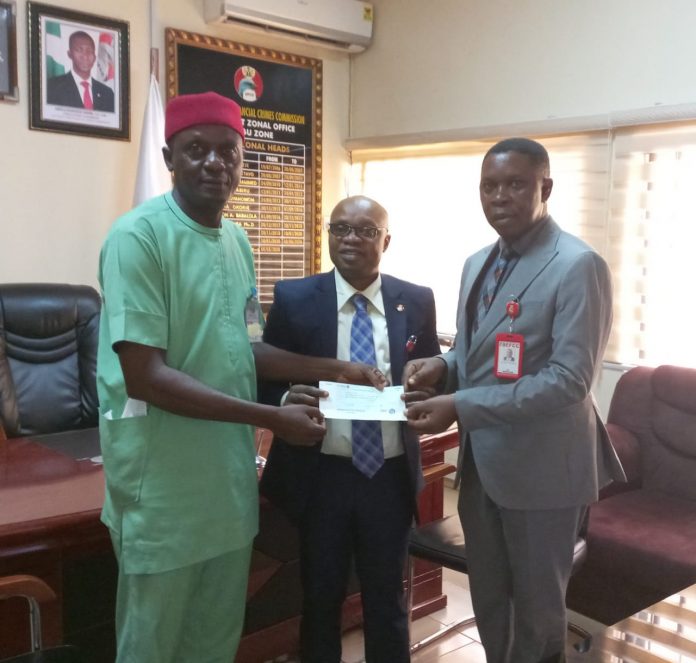 The Enugu Zonal Command f the Economic and Financial Crimes Commission, EFCC, has recovered and returned over N1.3m to the Awka South Local Government Area of Anambra State through its Chairman, Mr Leo Nwuba.

The recovery of the funds was disclosed Wednesday, 17 November, in a statement issued by the anti-graft Commission’s Head of Media and Publicity, Mr. Wilson Uwujaren.

TheFact Nigeria reports that the sum of N1,310,464.58 (One Million, Three Hundred and Ten Thousand Naira, Four Hundred and Sixty Four Naira, Fifty Eight Kobo) was part of funds recovered from the salary account of Mrs Okafor Christiana, a deceased staff of the Council who was still drawing her monthly emolument months after she had died.

The recovery followed a petition in July 2021 from her bank, GMB Microfinance Bank Limited, against the husband and next-of-kin to the deceased, one Mr Ifeka Vincent Kenechukwu, alleging that the late Mrs Christiana was still receiving her salary even though it was reported that she died on the 12th of May, 2020

The EFCC swung into action and in the course of the investigation, the sum of N937,485,01( Nine Hundred and Thirty- Seven Thousand , Four Hundred and Eighty Five Naira, One Kobo) was returned to the council, while the cheque for the balance of N1,310,464.58( One million ,Three Hundred and Ten Thousand, Four Hundred and Sixty Four Naira, fifty-Eight kobo) was presented to the Council’s Chairman today.

Receiving the recovered fund, Mr Nwuba thanked the Commission for its professionalism. “I am so happy to be here. I want to first express my gratitude to the Commander and his men. I admire your simplicity and the way you relate to people. It is different from the way the public sees the EFCC. We need to change the narrative about the EFCC. Today I can attest that the EFCC is truly a friend to the public. With this singular action, I believe that people will now realize that asides prosecution, the EFCC recovers money for the Government which will in turn be used for the benefit of mankind”, Nwuba said.

The Zonal Commander, Mr Oshodi Johnson commended the staff of the Economic Governance Section who worked tirelessly to recover the money and ensured that it was returned to the local government where it belongs.

“I want to thank my men in the Economic Governance Section led by ACE 11 Effiong Ekerendu who put in the work to recover this money for your local government. To some, this money may look small, but we as a government agency understand that no amount is small when it comes to government money”, said Ekerendu.