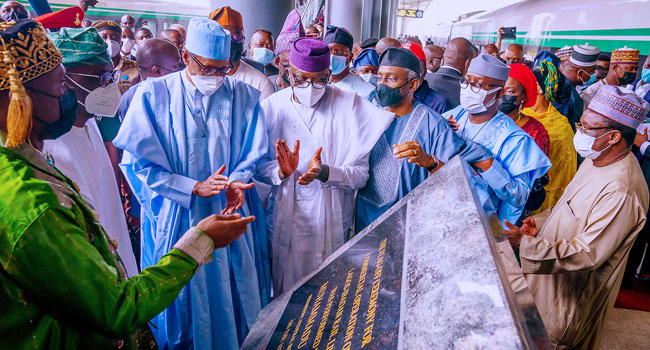 At the flag-off ceremony on Thursday at the Mobolaji Johnson Railway Station, Ebute-Metta, Lagos, the President described the multi-million dollar project as “another milestone in the drive of this Administration to revitalize the railway system, establish it as a choice mode of transportation for both passengers and freight and position it as a transportation backbone that can transform industrial and economic activity in the country”.

The flag-off ceremony came about four years after the federal government awarded the contract for the construction of the rail project to a Chinese firm, China Civil Engineering Construction Corporation (CCECC).

Prior to the commissioning, the project had suffered several delays owing to some factors,one of which was the COVID-19 pandemic.

Speaking during the flag-off of the strategic project, President Buhari expressed delight that the platform will facilitate the transportation of goods to remote areas.

This was as he assured of government’s commitment towards the completion of other rail projects in the country.

According to the President: “This vital line establishes an end-to-end logistic supply chain in railway transport within its short corridor, Lagos – Ibadan, as goods to the hinterland would now be transported by rail directly from the Apapa port Quayside straight to the Inland Container Depot located in Ibadan from where it can be distributed to other parts of the country.

“In clear recognition of the challenges posed to our economic growth by absence of strong and effective infrastructure, we have in the rail sector, further to other ongoing railway infrastructure projects, embarked on the completion of the outstanding segment of the Lagos – Kano railway, which is Ibadan – Kano

“The Lagos – Kano railway project when completed will link the Kano – Maradi line at Kano and a rail link from the Nigeria southern ports of Lagos to Maradi in Niger Republic will be achieved.

“The connection through rail would position Nigerian ports as the choice for import and export business of the people of landlocked Niger Republic.

“This would be beneficial to the economy through employment from new business opportunities and wealth creation”.

He explained that: “The Federal Ministry of Transportation and Ministry of Finance have been directed to vigorously act on engagement and reaching financial agreements with appropriate co-financiers to partner with the Federal Government for the development of the Ibadan – Kano railway and the connection to the Tin Can Island port as well as the West – East Coastal rail line from Lagos to Calabar linking Onitsha, Benin, Warri, Yenagoa, Port Harcourt, Aba and Uyo”.

He stated that same was already yielding the desired result, as construction activities on the railway segment, Kaduna – Kano has commenced with back-end engineering activities.

Earlier, the Minister of Transportation, Rotimi Amaechi, had assured that attention will be focused on other ongoing rail projects, with a view to ensuring their completion.

Amaechi, who spoke in an interview with newsmen, however, regretted that the China EXIM bank had yet to approve the loan for the Ibadan – Kano rail corridor.

“We are grateful to God even though I know that not all Chinese are Christians but i am a Christian. We are grateful to God and also the president of the country who had the courage to take the loan that we took from China Exim bank. As people are here celebrating today, i tell people that this place was a huge forest that we and CCECC had to go through and we have achieved it today.

“The celebration is not enough, it is the impact it would have on the economy; the goods and services, the personnel it would have to move in record time.

“While we are celebrating that, we are not be happy that up till now the China Exim bank is yet to approve the loan for Ibadan to Kano because we need to start that and complete it quickly because that is my fear”, Amaechi noted.

He further stated: “We are grateful that the Chinese government through the China Exim bank was able to give us the loan at a concessionary rate to construct from the seaport then to Ibadan. We hope that we get money to be able to construct from Ibadan ñ to kano so that we can complete the track and make sure that business takes place.

“We have about three or four projects. This month, we will start Kano-Kaduna and then we will also start Port Harcourt to Maiduguri which also is CCECC and then Kano-Maradi.

“We got money from China Exim bank, we paid back. We did put pressure on CCECC and delivered on time. In terms of quality, what we have is of good”.

In his remark, the governor of Lagos ,Babajide Sanwo-Olu said the completion of the project is a testament to what is possible when national and subnational government work together for the good of the people.
Sanwo-olu who spoke on behalf of governors of Lagos, Ogun and Oyo said”We have benefited immensely from your administration. We are delighted to see an administration start and finished a project within the life of that administration. It is a testament to what is possible when a national and sub-national governments cooperate on a common ground.

“Our collective efforts have not been vain. The corridor between Lagos and Ogun is arguably the most important in this country. Oyo state is home to dry inland plant and Ogun state houses the Assembly plants at Kajola.

“On our part in Lagos, we are ready to key into the national transportation master plan. We are building six train terminals along this corridor. We are entering a new era of rail transportation under the watch of President Muhammadu Buhari.

“We thank Mr. President for setting a new standard for infrastructural development in Nigeria,” he said.

The flag-off ceremony, which held amid tight security, was attended by Governors, senior government officials, traditional rulers among other dignitaries.