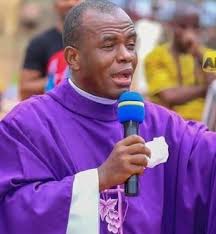 Enugu residents came out in their thousands to jubilate over the reappearance of the Spiritual Director of Adoration Ministry Enugu Nigeria ( AMEN) Reverend Fr. Ejike Mbaka.
Mbaka resurfaced on Wednesday few hours after he was reportedly missing.

TheFact Nigeria recalled that the spiritual director has been at loggerheads with the presidency over his call on the National Assembly to impeach President Muhammadu Buhari if he fails to resign following the increasing level of insecurity in the country.

The presidency responded that Mbaka was angry with the president because, Buhari has refused to give him contract as reward for his loyalty and support during the 2015 and 2019 elections.

In his defence, Mbaka said the presidency was attacking him because he blessed Nnamdi Kanu, leader of the proscribed Indigenous People of Biafra( IPOB).

The Catholic priest was scheduled to attend his usual Wednesday morning prayer programme, but when he did not show up, his congregation concluded that he might have been arrested.

The Speculations gained more grounds when a group, Ohanaeze Ndigbo Youth Council Worldwide (OYC), raised an alarm, that the whereabouts of Mbaka was unknown.

According to the group,“We are giving the Federal Government 48 hours to produce the priest, else they should be ready to face Igbo youths. They were dining and wining with him all along and now that he told the truth, they are no longer comfortable with him.

“Let nothing happen to Rev. Fr. Ejike Mbaka. It will not be in anybody’s interest.”
Immediately, the Department of State Services (DSS) clarified that they did not arrest Father Mbaka.

According to the DSS spokesman Dr Peter Afunanya, “This is not true. Fr Mbaka was not picked up by the DSS. Rev Fr Mbaka is not with the DSS. The DSS did not pick him up, please.