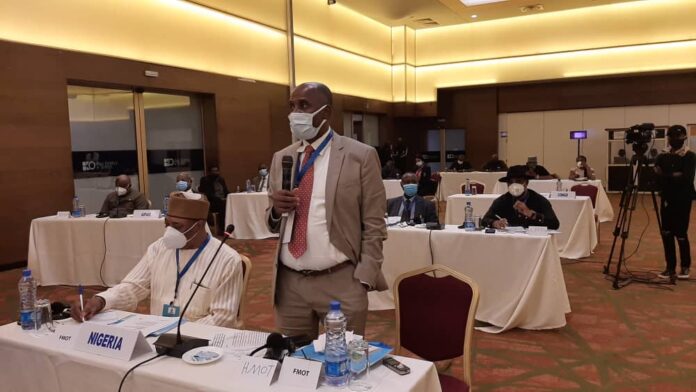 Amaechi disclosed this while declaring open the meeting of MOWCA Committee of Experts on the Regional Maritime Development Bank Project and Interim Board of Directors, Tuesday, in Lagos.

The member countries of the Maritime Organization of West and Central Africa having identified the major deficit in the development of indigenous participation in the regional maritime sector and associated value chain had, via a resolution at an annual general session, agreed to establish a maritime bank, with focus on the growth and development in West and Central Africa.

The Federal Government of Nigeria, through the Federal Ministry of Transportation (FMOT), was then mandated to take all necessary steps to bring the Bank to actualization.

According to Amaechi, any decision reached at the end of the meeting won’t be taking to the President until other member States indicate interest in writing to be part of the project which would develop the maritime sector in Africa.

“And that is not the intention, the intention is to establish a maritime bank that cuts across West Africa and Central Africa.

” Nigeria is going to sign for being part of that meeting and we are willing to make our contributions but we will not make those contributions until the two-third of the member States have accepted the decision and have agreed on a timeline which they will make their contributions. I’m willing to participate, we can’t have just six countries passing a law on behalf of over 25 countries in the region”,he said.

Happy Democracy Day From Us!

COVID-19: We’ll Not Use Any Herbal Medicines without Scientific verification -Buhari

Minister of Industry, Trade and Investment, Otunba Richard Adebayo has told Nigerians that the ministry's engagement with relevant stakeholders in the cement industry is...

The Federal Government has been advised to explore data and intelligence in order to ease tax collection and improve its revenue base. Tax experts, speakers,...

In line with one of the Key Drivers of his Vision for the Nigerian Air Force (NAF), which addresses enhanced strategic partnerships with Ministries,...

The Acting CG of NSCDC, Hillary Kelechi Madu, fsi, has appreciated the Federal Government and the Honourable Minister of Interior, Ogbeni Rauf Aregbesola for...

The Director General of NITDA, Kashifu Inuwa Abdullahi has agreed to form a strategic alliance with the Nigerian Army Resource Centre on research and...