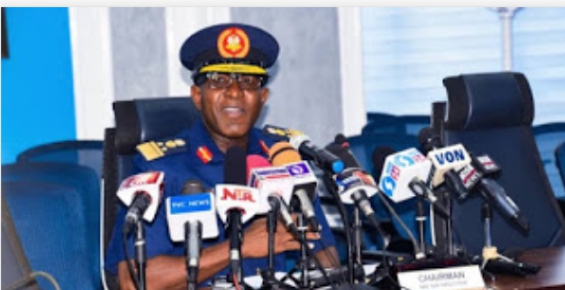 The Nigerian Air Force, NAF, is launching a unique telemedical center as part of celebrations marking the Force’s 57th anniversary.

According to Abubakar, the aim of the facility is the enhancement of the provision of excellent medicare to personnel and their dependants as well as civilian beneficiaries at lowest possible cost.

He said the NAF had grown over the years into a formidable force in its efforts to carry out its core mandate of protecting the country against its enemies, noting that within the West African Sub-region, NAF has carried out several assignments, especially in area of securing lives and property.

Unveiling the theme of the celebration: ‘Enhancing Nigerian Air Force Airpower Capabilities for Effective Joint Operations in Response to Contemporary National Security Challenges’, Abubakar further explained that the theme was carefully selected and aimed at emphasising the renewed focus on cooperation and collaboration among other services in the continued protection of the nation’s territorial integrity against its enemies.

This, he said, was also in line with the Chief of Air Staff, CAS, Air Marshal Oladayo Amao’s vision, which is to enhance and sustain critical airpower capabilities required for joint force deployment in pursuit of national security imperatives.

AVM Abubakar also said that this year’s celebration is structured to enlighten Nigerians of Force’s efforts in the ongoing fight against insurgency, terrorism and banditry in the country.

He said activities taking place include the induction of a new platform, as well as aerial displays by L-39-ZA, A-JET and JF-17 thunder aircrafts.

Other activities taking place across NAF bases in the country are medical outreaches to host communities in NAF’s various bases across the country, as well as humanitarian support activities by Nigerian Air Force Officers’ Wives Association, NAFOWA, across the six geo-political zones.

Abubakar noted that these efforts were geared towards having a professional service capable of deploying superior airpower in protecting the nation’s integrity against any form of threat.

He noted further that the celebration would involve a seminar focused to proffer workable strategies that are aimed at checkmating the myriad of security challenges in the country.

He also reaffirmed NAF’s commitment to safeguard the nation’s territorial integrity against any form of threat.