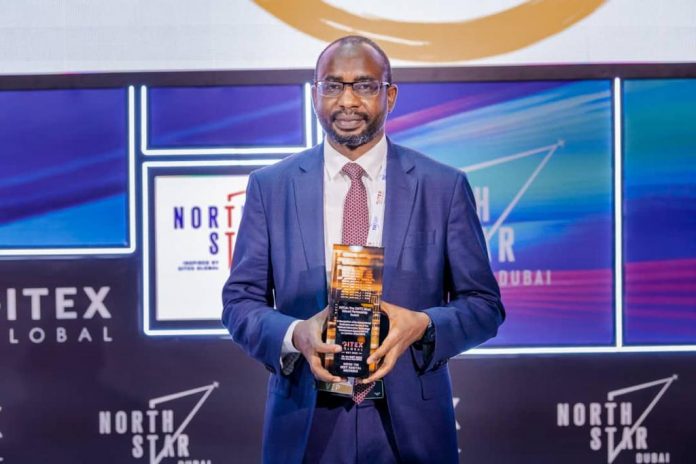 This was contained in a statement issued by the agency’s spokesperson, Hajia Hadiza Umar on Friday.

The award presentation was preceded by a panel discussion where the Director-General and his Ethiopian counterpart from the Ministry of Innovation and Technology, Selamyhun Adefris Haile deliberated on the topics: “What is the attraction of the startup ecosystem in Africa and “What is the government’s Strategies? (Startup act, Participating at GITEX).

Inuwa who seized the opportunity to speak on ongoing efforts by the Federal Government in strengthening the tech ecosystem said a lot of innovations were coming out of Africa where Nigeria owns the largest market.

According to him, there are about fifteen major sectors where Nigerian startups play key roles and are solving some challenges therein with their indigenous solutions which have global impact.

“Fintech tops the list because financial inclusion is critical to the economy and it is closely followed by e-Health, eduTech, Logistics and Mobility etc”.

“In Nigeria, more than thirty-six percent of the Startups are in Fintech sub-sector which explains why Fintech is thriving as they are creating hundreds and thousands of jobs”, Inuwa noted.

The Director-General stressed the fact that Nigeria as at early this year, had five unicorns out of the seven in Africa, adding that about three additional unicorns might be recorded anytime soon.

“That means before the end of this year, we are hoping to have between eight to nine unicorns in Nigeria. Some of them have huge capital base; Infact, one of them have more than $3.5B valuation which is a Fintech with valuation almost twice as the biggest bank in the country”, Inuwa affirmed.

Inuwa indicated that the government is trying to give a leveled playing field to all start-ups by creating an enabling environment for them.

“As a government, we have a foundational policy to help the Start-up which is called: National Digital Economy Policy and Strategy (NDEPS) for a Digital Nigeria and my Agency, NITDA which is one of the Agencies responsible for implementing the policy crafted our own Strategy Roadmap and Action Plan which has seven strategic pillars; all of these policies are geared towards creating a workable environment for our Startups”, Inuwa explained.

The NITDA Boss who avowed that the Agency adopts a developmental regulation approach in order to co-create with the tech ecosystem, assured the audience that the Start-up Bill once assented to by President Muhammadu Buhari will greatly help in addressing the myriad of challenges plaguing the sector.

He expressed optimism that Nigeria will be at the fore front of bridging the global talent gap.

“If Africa, Nigeria in particular positions itself well, we can bridge that talent gap; the talent industry is projected to create about $8.5 Trillion revenue by 2030, so any country that positions itself to bridge that gap will be among the top economies in the world”, the DG maintained.