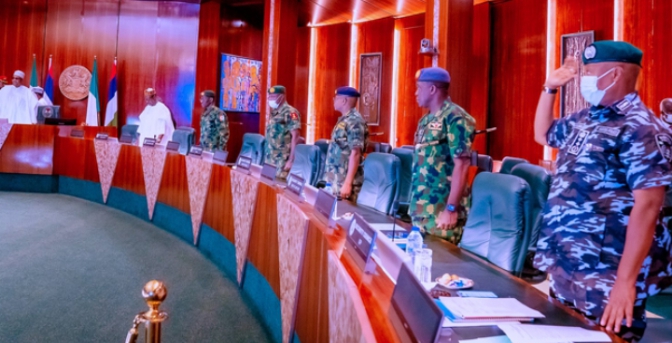 The National Security Council has directed the immediate stoppage of all illegal mining activities across Nigeria.

Minister of Interior, Rauf Aregbesola disclosed this while briefing State House correspondents on decisions reached at Friday’s meeting of the Council chaired by President Muhammadu Bunhari.

TheFact Daily reports that security and intelligence agencies have been directed to enforce the order.

Aregbesola, while reiterating the Council’s commitment towards ensuring a free and transparent electoral process in the general elections next year, urged politicians to pursue their democratic ambitions with decorum and in accordance with the laws of the land.

“That is the decision of the council. We are committed to ensuring a transparent, free and fair electoral process in the coming elections and all the processes leading to it. So, we enjoin all political parties, individuals and Nigerians to pursue their democratic rights and interest with decorum. All security forces and agencies are advised to maintain the law,” he added.

Speaking on cases of crude oil theft witnessed in some parts of the country, the Interior Minister said the National Security Adviser was advised to put together a strong team in conjunction with the Secretary to Government of the Federation, to investigate the worrisome matter.

He said the team is to determine the rate of illegalities involved and perpetrators of such acts that are grossly affecting the economy of the nation and report back to the Council.

Chief of Defence Staff (CDS), Gen. Lucky Irabor, who also briefed journalists after the meeting, stressed that the military will sustain its tempo of fighting oil theft.

“Activities of the Armed Forces and other security agencies within the oil and gas base were also commended but with the directive to sustain the pressure, and it is our resolve to deal decisively with those who have been involved in those illegal acts”, he said.

The Defense Chief further revealed that a total of 101 combatants comprising members of the Boko haram and Islamic State of West Africa Province (ISWAP) groups have been moved from detention facilities for de-radicalization.

“Council was also briefed that a total of 101 ex-combatants were taken to Operation Safe Corridor and are currently undergoing the process of de-radicalization at the centre. These were people that have been in detention for several years; some of whom had served their jail terms, others were awaiting trial but because of the long time they have been detained and in line with the procedures for handling anyone who has been involved with terrorism, they have to be moved to the Centre”.