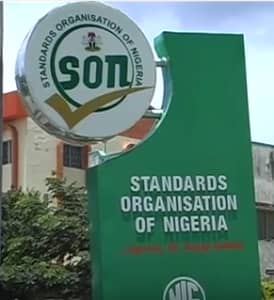 The Standards Organisation of Nigeria (SON) on Friday, got justice on two men, Uche Johnson and Kingsley Meteke, for producing and distributing substandard engine oil.

The SON had taken them before the Federal High Court in Lagos on a four count charge of production, possession, dealing in and distribution of substandard engine oil.

A statement made available by Mr. Bola Fashina, Head, Public Relations of SON said on the duo were handed two years imprisonment each.

The sentences take effect from January 27, 2019 when the defendants were arrested.

Justice Oluremi Oguntoyibo convicted them after they pleaded guilty to the offence and admitted to have adulterated 128 drums and 9.45 litres of engine oil.

SON said the defendants indulged in the production and distribution of engine oil which did not meet the mandatory Nigeria industrial standards requirements for the product.

The products, according to the prosecution, failed to comply with the Standards Organisation of Nigeria’s (SON) Conformity Assessment Programme (SONCAP) procedure.

This contravenes the provisions of sections 1(8) and 1(8)(II) of the miscellaneous offences act, 2004.

The defendants who initially pleaded not guilty to the charges later pleaded guilty.

Joseph Olofindare, prosecuting counsel said the judgment would serve as a deterrent to manufacturers, importers and dealers in substandard products.

“I want to encourage genuine manufacturers and consumers not to be despondent or complacent. SON is there to prosecute any offender.

“It’s a judgment that will send a message to the public that SON is working tirelessly under the leadership of Mr. Osita Aboloma to protect the lives and properties of Nigerians”, he said.

Barrister Olofindare admonished manufacturers and Importers in Nigeria to adhere strictly to the procedure by ensuring that local products comply with the Mandatory Conformity Assessment (MANCAP) requirements while imported products undergo SONCAP certification before shipment to avoid prosecution and convictions as befell the two.

He assured Consumers of the SON Management’s commitment to ensuring they get value for money and protection from the menace of substandard, fake and adulterated products.