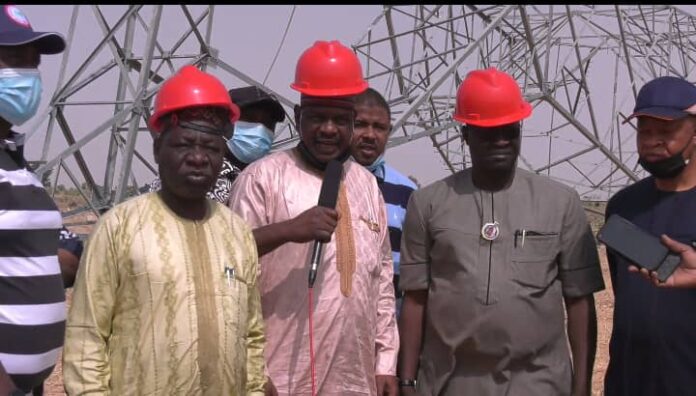 The General Manager,TCN, Ndidi Mbah in a statement quoted the MD as saying that the transmission line would be completed in two weeks to enable TCN restore supply to Maiduguri and its environs.

The Acting Managing Director of TCN, Engr. Sule Abdulaziz, gave this assurance on Sunday 21st February, 2021, during an inspection tour of the site of the incident where reconstruction works for the new foundation for the towers have commenced.

According to him, following the damage of tower T159 which pulled down towers T160 and T161 along the same transmission line route recently, work on the transmission line diversion became necessary as the replacement of the permanent towers would take a little longer to complete and there was need to urgently meet the power supply need of electricity consumers in the affected areas.

The Ag. MD/CEO further explained that work on the by-pass for temporary diversion of electricity would be completed first, as quickly as possible, while for the permanent tower structure which is on-going, the engineers will need to take more time to properly reconstruct and mount new replacement towers.

Engr. Abdulaziz noted, “We are here at the site of the incident on the outskirts of Maiduguri, behind me is one of the towers that was vandalized. We are here with all our contractors who are already working on both projects. We have bought all the materials they require to do the work and would continue to bring in the rest from Maiduguri town in batches. On the other side you can see the diversion we are already putting in place, which is important to enable us supply the Maiduguri people with light as quickly as possible”.

The MD emphasised that TCN will complete the permanent reconstruction work on the towers very soon, to make sure that power supply is restored.

Meanwhile, for the by-pass which would provide urgent relief, he said that if there are no interruptions, it will be completed in two weeks’ time. Already, materials, workers and combined team of security personnel required at the site to facilitate progress of work had been deployed.

He thanked the security agencies and appealed to them to continue to support TCN to enable the company complete the task quickly.

Engr. Abdulaziz expressed his profound appreciation to the Governor of Borno State Prof. Babagana Zulum, whom he commended for the zeal and obvious commitment to resolving the power challenge in his state.

The MD expressed satisfaction with the progress of work at the site, noting that Governor Zulum has continued to give TCN all the necessary support it required which has enabled the company continue with the project inspite of security challenges.

The Ag MD/CEO was accompanied to the site by the Borno State Commissioner for Housing and Energy, Engr. Yuguda Sadeh Vungas, the MD of Yola DisCo Engr. Baba Mustapha alongside some top Management staff of TCN

We Have Arrested 89 Touts At Abuja, Lagos Airports- FAAN