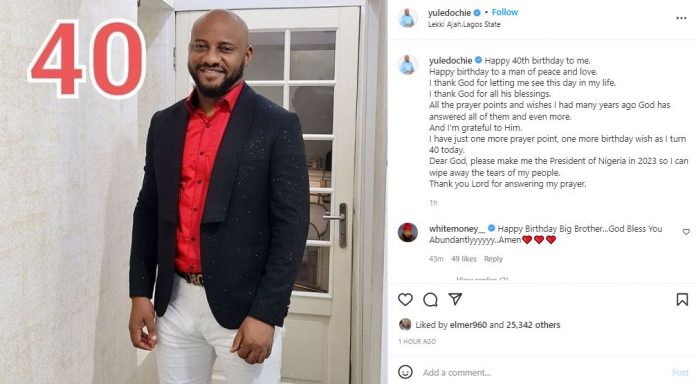 Nollywood actor, Yul Edochie, has prayed to God to make him become Nigeria’s president as he celebrated his 40th birthday on Friday.

The movie star took to his Instagram page to make his birthday wish known and also disclose his plans if elected into office during the 2023 presidential polls.

Edochie indicated that if he is voted as the president of the country, he will wipe away the tears of “my people”.

“Happy 40th birthday to me. Happy birthday to a man of peace and love. I thank God for letting me see this day in my life,” Edochie wrote.

“I thank God for all his blessings. All the prayer points and wishes I had many years ago God has answered all of them and even more.

“And I’m grateful to Him. I have just one more prayer point, one more birthday wish as I turn 40 today.

“Dear God, please make me the President of Nigeria in 2023 so I can wipe away the tears of my people.

“Thank you Lord for answering my prayer.”

Edochie declared his plans to run for the presidential in 2018 under the All Progressives Grand Alliance (APGA) party but had to abandon the ambition “after due consultation”.

He had also contested for Anambra state governorship election in 2017 under the Democratic Peoples Congress (DPC) but lost after securing only 145 votes.

Following his defeat, Edochie was appointed the senior special assistant on creative and entertainment media to Willie Obiano, former Anambra governor, in 2018.

He resigned a few months later and defected from APGA to join the Peoples Democratic Party (PDP).