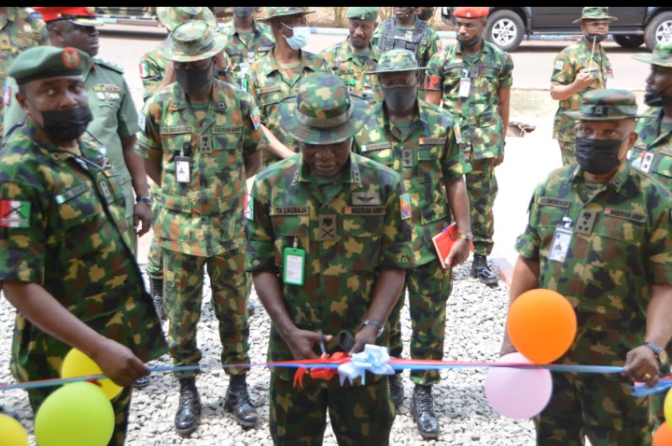 The Nigerian Army has restated its commitment to troops’ welfare with the Commissioning of some notable Intervention Projects.

The General Officer Commanding, (GOC) 82 Division Nigerian Army, Major General Taoreed Lagbaja, stated this on he occassion of the commissioning of key intervention projects completed by the Division in Abakpa Cantonment Enugu on 8 March 2022.

In his remarks, Gen Lagbaja who earlier identified welfare of troops as his topnotch priority, commended the Commander 82 Division Hospital for ensuring the projects were completed in good time, adding that the projects would greatly boost the capacity of the hospital to address the health needs of the Abakpa Cantonment and neighboring communities.

He disclosed that the newly remodelled Soldiers Club will provide a conducive environment for soldiers and their families to rest after a busy day, while also adding that the newly constructed transit accomodation will alleviate some of the challenges soldiers on transit face in relation to accomodation.

He charged beneficiaries of the various projects to ensure constant maintenance for its long use.

Buhari Approves Reconstitution Of NBC Board