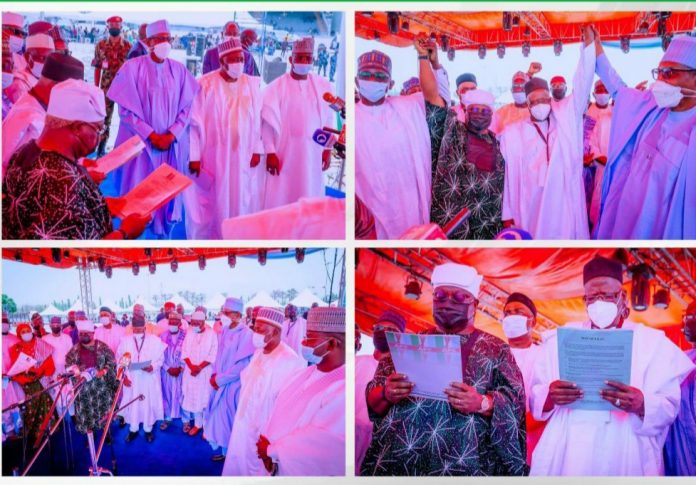 The Peoples Democratic Party (PDP) mocks the All Progressives Congress (APC) over the imposition of Sen. Abdullahi Adamu, a man who was arraigned in Court on 149-count charge of alleged fraudulent award of contracts and stealing of public funds estimated at N45 billion, as its Natronal ‘Chairman.

The PDP describes the APC jamboree in the name of a National Convention as a Convention of lies, celebration of illegality, corruption and arrogance in failure adding that any leadership birthed through such process can only be overtly corrupt, debauch and illegal.

The opposition party said, it was clear that with the combination of the corrupt, deceitful and rudderless Buhari-led APC government and the illegitimate Abdullahi Adamu-led party leadership, corruption, economic hardship and rudderlessness in the APC government will worsen in our country in the remaining one year of the APC in government.

The National Publicity Secretary, PDP, Hon. Debo Ologunagba in a statement said, the composition of the APC national leadership was a clear confirmation that President Buhari has never been committed to the fight against corruption as well as his willingness to further open our national vaults to ravenous treasury looters in the APC.

It said, “the new APC Chairman should inform Nigerians why he was not courageous enough to submit himself to trial at the Federal High Court, Lafia, Nasarawa State rather than hide under technicalities. Senator Adamu should therefore come clean to Nigerians on the said case before parading himself as a saint.

“It is therefore pathetic to see Sen. Adamu showboating on stage to impress his puppet master by attempting to denigrate other Nigerians and our great Party, the PDP.

“Our Party has only pity for Sen. Adamu and does intend to confer him an undue relevance with a response. Sen. Adamu should however be conscious of the fact that time does not run against the State in criminal matters. He should therefore not have any illusion that being an APC Chairman will avail him a perpetual cover.

“Moreover, it was appalling to see APC leaders come out one after the other at their national jamboree to spew out lies and false performance claims on the economy, infrastructure and security even in the face of biting economic hardship, high cost of living, excruciating fuel emergency, lingering crisis in the education sector and escalated insecurity that was happening real time and simultaneously when the ridiculous claims of achievement were being made.

“Is it not shameful that while APC leaders were lying on stage in Abuja, terrorists were busy attacking the Kaduna International Airport, located in an APC controlled state?

“In any case, the PDP restates its cautions that the purported APC National Working Committee (NWC) does not have the legitimacy of office as the process that produced it under the Caretaker/Extraordinary Convention Planning Committee (CECPC) remains unconstitutional and flawed.

“The PDP cautions aspirants intending to participate in the 2023 general elections under the APC to note that they are on a journey to nowhere with the APC”, the said.