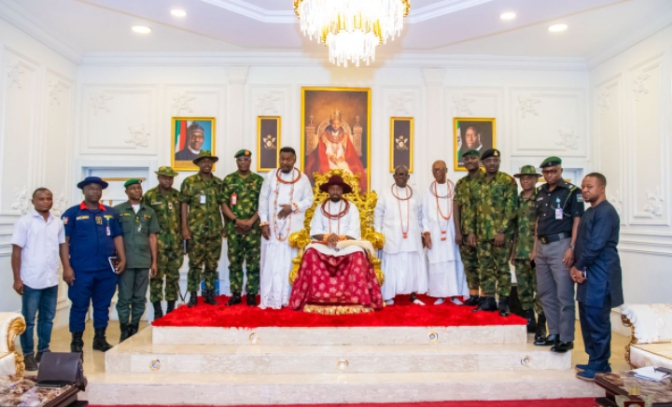 The Olu of Warri, His Royal Majesty, Oba Ogiame Atuwatse III, has reassured the Nigerian Army, that his kingdom will continue to work harmoniously with them for the sustenance of peace in the region.

The Royal Father gave the assurances when the Commander, 63 Brigade, Brigadier General Landers Saraso, paid him a courtesy visit at his palace in Warri.

TheFact Nigeria notes that the highly revered monarch, who had donated a piece of land for the construction of the permanent site for 90 Amphibious Battalion at Koko, expressed his appreciation to the Nigerian Army for its support to the Itsekiri nation in particular and Warri Kingdom in general, and for the peace and tranquility currently enjoyed in his domain.

He pledged to continue to support the military in achieving its operational mandate in the region by ensuring peace in the creeks.

Earlier, the Commander 63 Brigade, who also doubles as the Commander Sector 1 Operation DELTA SAFE stated that on assumption of command he deemed it necessary to pay homage to the monarch whom he described as a symbol of the rich heritage of the Itsekiri nation.

He further said that his visit was to formally convey the Chief of Army Staff’s (COAS’) Easter Goodwill message and appreciation to his Royal Majesty for the donation of a piece of land for the construction of a permanent site for 90 Battalion at Koko. This he said has demonstrated his Royal Majesty’s commitment to peace and security as well as support for the NA.

While conducting operational visits to troops’ locations in his Area of Responsibility (AOR), the Commander also visited the Commander Nigerian Navy Ship (NNS) Delta, Commodore Baba-Inna, where he expressed appreciation for the synergy existing between the NA and the Nigerian Navy in the region.

He noted that this synergy is in demonstration of the COAS’ disposition for inter-Service collaboration and synergy.

He further pointed out that the visit afforded him the opportunity to have first hand information on operational activities in his AOR.