The Nigerian Army, NA, has labelled the alleged complicity of troops in a fictitious case of kidnapping of a family in Kaduna as ‘malicious disinformation and falsehood’.

According to the Director, Army Public Relations, Brig. Gen. Onyema Nwachukwu, who stated this Saturday, 30 April, 2022, in a press statement made available to the media, nothing could be farther from the truth.

TheFact Nigeria gathers that one Simon Okafor of Radio Biafra, London had, last week, reported that troops were complicit in an alleged case of kidnapping of a family of 10 in Kaduna. Okafor had further alleged that about 87 percent of NA soldiers are kidnappers and bandits.

Nwachukwu, who said the report was ‘a creation of IPOB/ESN social media foot soldiers, with intent to malign the NA’, averred that the picture of soldiers posted on the social media was that of impostors who were arrested in Lagos – Ondo states axis by troops of Operation CHECKMATE under 81 Division NA, sometime in April 2022, and that the suspects had been handed over to the Nigeria Police. 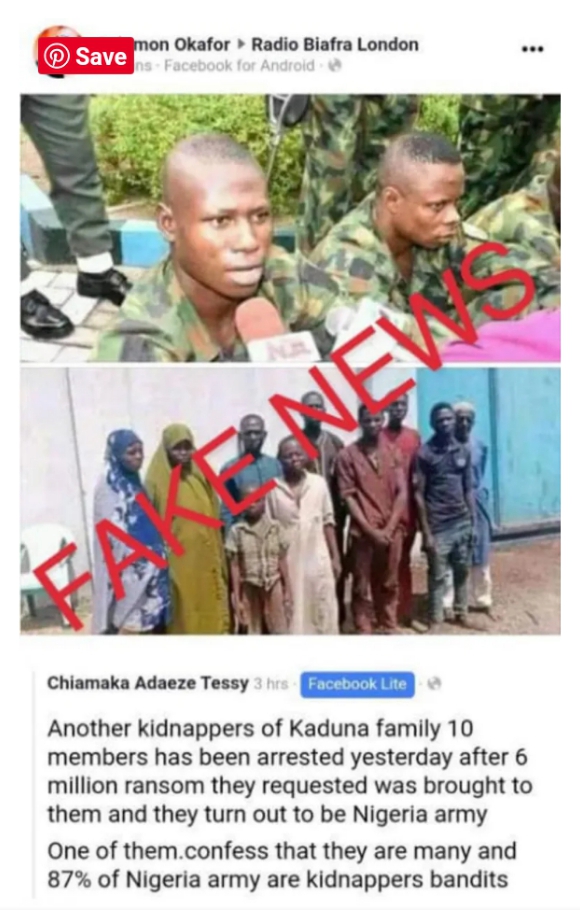 “It is also crucial to emphasize that following troops’ successful exploits in unravelling and unmasking IPOB elements who have been masquerading as unknown gunmen and wreaking carnage against Ndigbo in South East Nigeria, IPOB/ ESN have severally attempted to use doctored graphic images, video footages and spurious narratives in online and social media campaigns to disparage the NA and bring her to disrepute”, the statement said.

The Army further reiterated that it remains undeterred, and will continue to execute its constitutional mandate of defending the sovereignty and territorial integrity of Nigeria, towards building a united nation,
“no matter the campaign of calumny by IPOB and other fifth columnists”.

Consequently, the NA urges members of the public to disregard the “mindless and irresponsible propaganda clearly emanating from IPOB, aimed at promoting insecurity in the country”, Nwachukwu said.

I Was Underestimated By Barcelona -Luis Suarez