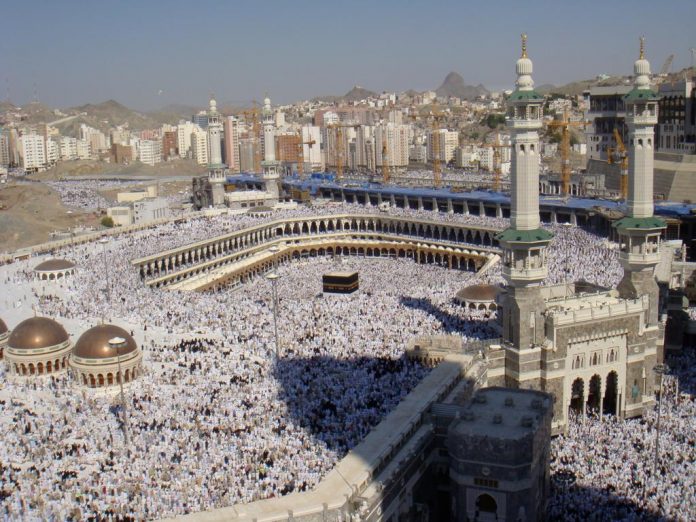 National Hajj Commission of Nigeria, (NAHCON), has warned Nigerian politicians against displaying posters of their candidates for the forthcoming presidential election in the grand mosque in Makkah, Saudi Arabia.

The commission gave the warning on Thursday in a statement by its Assistant Director, Public Affairs, Hajiya Fatima Sanda Usara.

TheFact Nigeria noted that the commission who frowned at the practice said, “the Saudi Arabian authorities are very strict on any form of politicking while in their land, especially in the Holy Ka’aba where devotees engage in solemn prayers.”

“The NAHCON leadership had observed with dismay the unfortunate trend where politicians displayed posters of their candidates in the grand mosque in Makkah.

“This action is tantamount to desecration of a religious sanctuary which attracts penalties when apprehended. Hence, in the interest of the actors and Nigeria’s image, pilgrims are cautioned to desist from such illegal activities please,” NAHCON said.

In another development, NAHCON, in its role as regulator, coordinator, and supervisor of Hajj and Umrah matters, has embarked on Ramadan Umrah monitoring both from Nigeria and in Saudi Arabia, disclosing that data have been gathered on performance of tour operators with complaints compiled where necessary.

In the course of their assignment, NAHCON Umrah monitoring team traversed the cities of Makkah and Madinah scouting for stranded pilgrims needing assistance.

According to Usara, the team successfully identified some tour operators who accordingly discharged their duties to their clients instantly.

She, however, added that for those tour operators that could not be reached, NAHCON staff on ground liaised with the Ministry of Hajj and Umrah who provided phone numbers to call for intervention.

Usara further informed that in a collaborative arrangement with NAHCON’s team, the ministry’s personnel booked accommodation for these category of pilgrims by deducting from the operator’s bank guarantees with the ministry for the purpose of settling the pilgrims, warning that penalties will follow these violations.

Consequently, she said legitimate complaints are invited from dissatisfied pilgrims as well as tour operators with valid contract papers signed between the two parties, noting that this will aid NAHCON in adjudicating in the matters.

"The Fact" is an Online News Media published by The Fact Nigeria Limited in January, 2020 to address the issue of Fake News by promoting objective reporting. As an independent and non-partisan group, the outfit has adopted an unbiased and investigative style of reporting to deliver complete and factual stories. As the mouthpiece of the vulnerables, the paper is out to check the activities of the powerful by holding them to account through credible, original and illuminating reports.
Contact us: thefactonli[email protected]
© Copyright 2021 - TheFact_NG
%d bloggers like this: