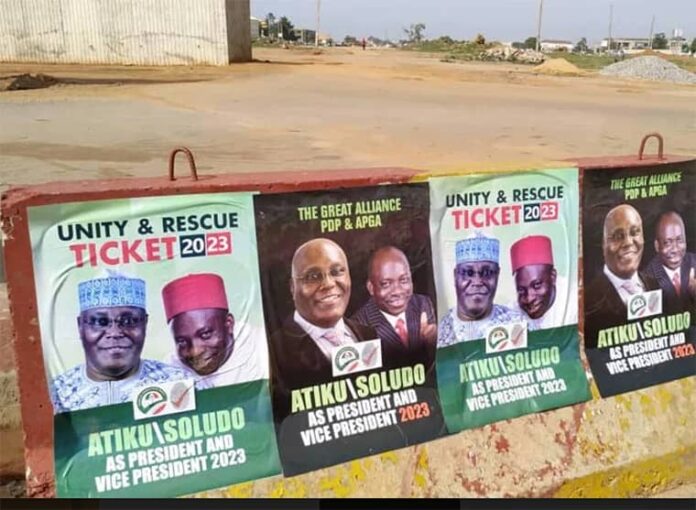 Alhaji Abubakar described the act as the handiwork of mischief makers.

Soludo, is currently  in the race for the November 6 governorship election in Anambra State on the platform of the All Progressives Grand Alliance (APGA).

The former presidential candidate of the People’s Democratic Party, (PDP), in the 2019 general election, clearified that for the avoidance of doubt, he is in the PDP while Charles Soludo is in APGA.

In a statement signed on Monday by his Media Adviser, Mr Paul Ibe, Alhaji Abubakar also said that it was unthinkable for anyone to attempt to drag him into an election in Anambra which outcome would be determined by the people of Anambra themselves.

According to the statement, Atiku is presently preoccupied with joining hands with other well-meaning Nigerians to help in finding solutions to the myriad of challenges plaguing the nation such as insecurity and economic downturn leading to joblessness and extreme poverty.

The statement reads: “Our attention has been drawn to reports in a section of the media of campaign posters of His Excellency Atiku Abubakar and Prof Charles Soludo, an aspirant in the Anambra State governorship election in parts of Abuja.

“Ordinarily, we would have ignored the reports, but for the interest of those who may be misled by the disingenuous plot.

“We know nothing about the posters or those who may have promoted it.

“It is obvious that this is a work of mischief. For the avoidance of doubt, Atiku Abubakar is of the PDP while Charles Soludo is of APGA.

“It is silly of anyone to attempt to drag the former Vice President into an election in Anambra which outcome will be determined by the people of the state.

“Atiku Abubakar is presently preoccupied with joining hands with other well-meaning Nigerians to help in finding solutions to the myriad of challenges plaguing our nation such as insecurity and economic downturn marked by joblessness and extreme poverty.

“That explains why last Monday, the Waziri of Adamawa commissioned the headquarters of Standard Micro Finance Bank and two manufacturing plants, promoted by him in Yola to provide much-needed jobs and opportunities.

“We wish to restate that the purported 2023 campaign posters in circulation linking Atiku to Soludo is the handiwork of mischief makers and should be ignored”, the statement concluded.

Atiku ran the 2019 presidential election on the platform of the PDP along with former governor of Anambra, Mr Peter Obi.”