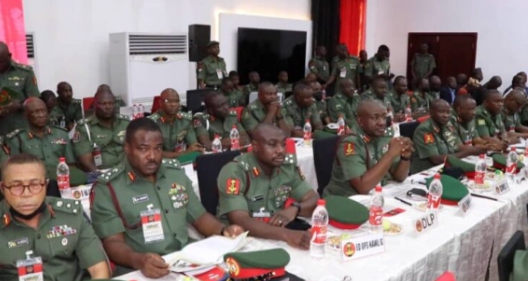 The Nigerian Army has said that it has reviewed its Rules of Engagement and Code of Conduct to ensure secured and hitch-free general elections next year.

Chief of Army Staff, Lt Gen Faruk Yahaya, who disclosed this Tuesday, while declaring open the 2022 COAS 3rd Quarter Conference in Abuja, said the review is to ensure that troops remain professional and apolitical throughout the elections.

It will be recalled that the Army Chief had, at the last difference in June, 2022, mentioned that the NA will review its Rules of Engagement and Code of Conduct for the general elections.

He therefore expressed delight “that the reviewed document is ready and will be distributed at the end of this conference. Commanders are therefore to ensure that all personnel deployed for security duties during the election period are given personal copies and thoroughly educated on the guidelines provided in the document,” he stated.

While stressing that there have been great achievements against terrorists, bandits and kidnappers between the 2nd Quarter Conference and now, Yahaya urged the various Commanders not to rest on their oars, but rather sustain efforts to stamp out terrorists and other criminals from Nigeria.

“You have all done well in the implementation of the decisions taken during the last conference as evident in the successes recorded, particularly in our ongoing operations across all theatres of operation.

“Our kinetic actions in the North East theatre of operations have continued to dismantle the cohesion of the insurgents resulting in massive surrenders of the terrorists.

“This has positively impacted on the morale of troops and greatly bolstered the confidence of the citizens. Efforts must therefore be geared towards leveraging on the gains so far recorded to stamp out the miscreants permanently”, Yahaya said.

The Army Chief also disclosed that the recent successful hosting of Nigerian Army Day Celebration in the South East has impacted positively on the security situation in the region, stressing that the troops have continued to take decisive actions against the secessionists.

The troops deployed in the South South region under Operation DELTA SAFE, he said, have also continued to perform “creditably with the rejuvenated joint operations leading to the arrest of several suspects and their sponsors.”

On the South West, the COAS said, the Nigerian Army has also continued to contribute positively for the maintenance of security in the region which he said has brought relative calm in the region.

“Our security arrangements in the region have been reinforced in collaboration with other security agencies, particularly in the wake of the unfortunate incursions by terrorists to the region”, Yahaya said, adding that “more successes are envisaged in the region in the days ahead as concerted efforts are being undertaken to track and apprehend the criminals as well as their sponsors.”

He said that offensive operations have also been intensified in the North West and North Central regions since the second quarter conference.

“Accordingly, troops in conjunction with the Nigerian Air Force have continued to neutralize bandits’ and destroy their hideouts under the recently launched onslaughts such as Operation DESERT SANITY.

“As troops continue to sustain the offensives on the bandits and terrorists, efforts are ongoing to enhance our training activities and inject more manpower as well as game changing equipment into all theatres of operations. In this regard, we remain grateful to the Commander in Chief, President Muhammadu Buhari GCFR for his exemplary leadership and unflinching support.” he stated.

The Third Quarter Conference, he said, provides an important platform to further appraise the Nigerian Army’s performance and also bring in fresh ideas to enhance its activities on all fronts.

Speaking earlier in his welcome address, the Chief of Policy and Plans of the Nigerian Army, Major General Anthony Omozoje, thanked the COAS for his outstanding leadership style, which he said is largely responsible for the recent achievements recorded by the various Commanders and Principal Staff Officers.

After the Group photographs at the end of the opening ceremony, the Conference went into a closed session.

Others are Brief on OPHK, Presentation on Manpower Audit of OPHK, Open Mic Discussion on the Briefs of the day, and Presentation of Trophies and Medals to COAS by Directorate of Army Physical Training, DAPT.

Agric Ministry, Others Move To Eliminate Gender Disparity In Sector