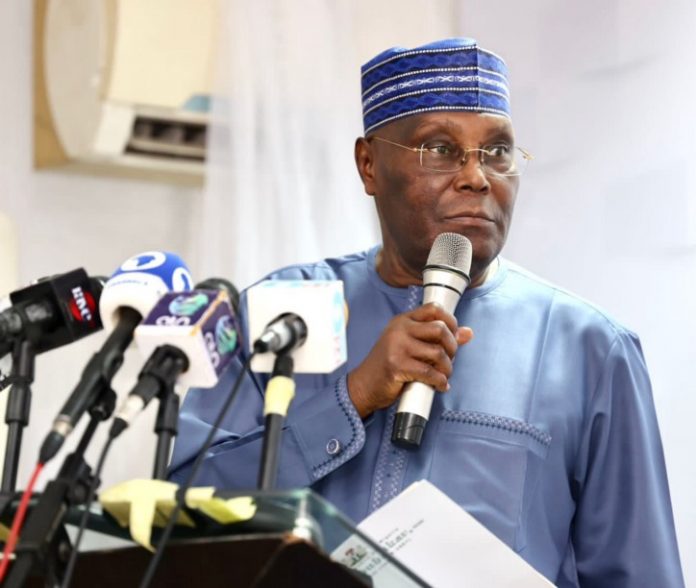 The former Vice-President of the Federal Republic of Nigeria and Presidential Candidate of the Peoples Democratic Party (PDP) in the forthcoming 2023 general election, Alhaji Atiku Abubakar is set to unveil his 5-point Agenda for the country.

Atiku dropped the hint while speaking at the private sector Economic Forum organised by the Lagos Chambers of Commerce and Industry on Monday in Lagos.

“Indeed, economic prosperity is the thread that runs through the other critical elements of the agenda”, he said.

The former VP asserted that some of the Nation’s Economic Deficiencies were Self-inflicted.

He argued that the country’s economy was crawling rather than growing.

He said, “Nigeria’s GDP grew at an average rate of less than 1% since the APC assumed power in 2015. Compare this with an average growth of 6.5% in the seven years earlier.

“Per capita income, a measure of citizens’ well-being, has progressively fallen since 2015 because of declining output and a fast-growing population. Nigerians are worse-off today than they were in 2015.

“The current rate of growth of about 3.5% masks the real challenges facing the economy. The economy remains very fragile as the key sectors are either growing slowly (as with agriculture) or contracting (as with oil and gas). The oil and gas sector, which is the economy’s lifeline has suffered decline in 19 out of 30 quarters since 2014.

“For many economic sectors and for the ordinary citizens it still feels as if we are in a recession”, he said.

He said, under the present administration Nigerians are not working.

“The number of unemployed people is more than the population of Lagos state or the inhabitants of the Federal Capital Territory (FCT), Abia, Bayelsa, Cross River, Ebonyi, Kwara and Nasarawa states combined!

“What is even more worrisome is that the majority of the unemployed are young men and women, who lack not only the means to survive but any hope for the future. The number of unemployed youths increased by 9 million from 4 million in 2015 to 13 million in 2020.

According to him, more Nigerians were poorer and more miserable today than in 2015.

“Job losses, declining purchasing power of per capita income and lack of citizens’ access to basic amenities have pushed more than 90 million people below the poverty line and created more misery for the poor in towns and villages.

“This year, around 12 percent of the world population in extreme poverty, with the poverty threshold at 1.90 U.S. dollars a day, live in Nigeria.

“Basic commodities are now beyond the reach of the average Nigerian. A loaf of bread costs 100% more today than it did in 2020. Farmers now pay more than 200% more for a bag of fertilizer -if they see it-than they did in 2020”, he said.

The PDP Presidential Candidate Nigeria wss being dressed in borrowed robes, saying that “Nigeria under the APC-led government has consistently run-on budget deficits since it came to power in 2015.

“These budget deficits are often above the 3% threshold permissible under the Fiscal Responsibility Law. Ironically, this has increased the government’s appetite for more debts- now more than N50 trillion (if you add AMCON debts and Ways and Means)

“For the first time in Nigeria’s history, the FGN paid more in debt service than it earned! By spending more than 100% of its revenue for debt service, Nigeria is breaching one of the applicable debt-sustainability thresholds. The APC-led government is dressing Nigeria in borrowed robes!

“This action puts a big question mark on the capacity of the government to manage its rising debt profile without endangering macroeconomic stability. Indeed, we are concerned that this action is already exposing Nigeria to financial stability issues as we slip from a medium risk of debt distress to high risk of debt distress”, he said.

On capital flight, he said, policy incoherence and flip-flops combined with internal insecurity continue to pose a significant risk to investment and thus output growth.

“We have lost our esteemed position as Africa’s preferred investment destination to less endowed nations”, he noted.

He however, assures that if voted into office as the President of the Federal Republic of Nigeria, he would change the narrative.

“Our economic growth and development agenda seeks primarily to stimulate the growth of the economy.

“It envisions an economy that is modern, dynamic, and competitive, capable of taking its rightful place among the top 20 economies of the world.

“Nigeria has the potential to double its GDP by 2030 and achieve a per capita income of approximately US$5,000”, he said.

Amaechi Explains Why Nigeria Has No National Shipping Line