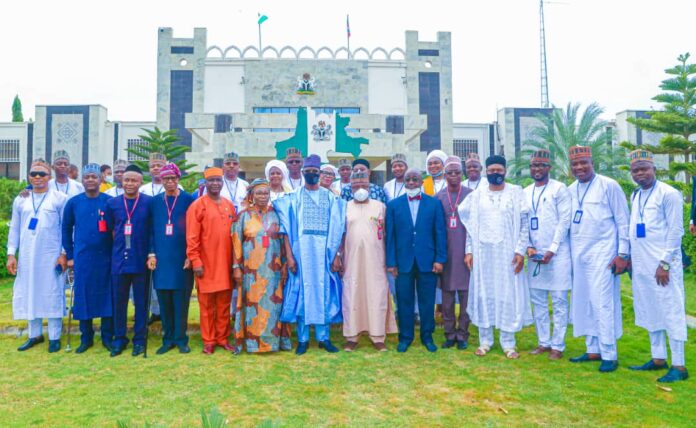 Nasarawa State governor, Engineer Abdullahi Sule, has identified lack of good governance, as well as functional education, particularly in Northern Nigeria, as part of the reasons for rising security challenges in the country.

Engineer Sule made this known while hosting participants from the Executive Intelligence Course 14, from the National Institute for Security Studies, Abuja, at the Government House, on Monday.

According to the governor, Nigeria has been unlucky not to have witnessed good governance through the years, compared to most countries around the world that have entrenched good governance and are therefore able to maintain some level of security.

Engineer Sule however pointed out the issue of good governance must be seen to be all encompassing, broad based and not limited to political office holders, such as the president or governors.

“It’s not just about government officials, good governance must be demonstrated even in our homes. Has somebody been able to provide the leadership in his home?

“It’s not just about being a president or governor. Good governance must start from our own homes, our communities and goes back all the way,” he said.

The governor equally identified lack of functional education, especially in the Northern part of the country, as responsible for the insecurity across Nigeria.

While noting that there is no country in the world with zero security challenge, Engineer Sule said insecurity in Nigeria is further compounded by the absence of good governance, poor socioeconomic development and dysfunctional education, which produces mostly unemployable graduates.

“We have to be able to tell each other the truth. I think over the years, Nigeria has not been lucky to have good governance. Most of these countries around the world that you see are having good governance, they have been able to maintain some level of security,” he stated.

He decried a situation where most states in the country are under policed, stressing that the number of security agencies in Nigeria are inadequate to fully tackle the mounting security challenges.

Citing Niger State as example, covering 11 percent of the total land area of the country, the governor lamented that the North Central state currently under siege from armed bandits, has less than 4000 policemen, even as there are some local government councils in that state that don’t have up to 150 policemen.

Speaking on the efforts of his administration to change the narrative in Nasarawa State, Engineer Sule, said the government is working hard to bring much needed development to the people, as encapsulated in the Nasarawa Economic Development Strategy (NEDS).

Having realised the significance of functional education in the development of the society, the governor said, his administration in its first year, devoted 27 percent of the budget of the state to education, jerking it up to 35 percent, the largest in the country, the second year.

“Nasarawa State is going through some level of transformation, we are a new state, for that reason, we will continue to change gradually. Nasarawa is actually what you consider a green field, an area where you can start from ground zero and be able to build,” he stated.

The governor added that the peace being witnessed in the state, is a collective effort, with all the security agencies operating in the state, working tirelessly to ensure lasting peace.

He also attributed the peaceful nature of the state to the administration’s inclusive governance, which is delivering good governance to every part of the state.

Earlier, Commandant of the NISS, Alhaji Ayodele S. Adeleke, said they were in the state, to share experiences that will enrich the participants, especially regarding the theme of the programme, “Governance, Security and Sustainable Development in Africa: Nexus, Prospects and Challenges.”

“The reason for our visit is to hear from you, your experiences that will enrich the participants on the theme of the programme.

“Because we know you are doing very well in the state. We want you to share with us what is the magic behind your giant strides. We want to draw from your wealth of experience during this visit”, he said.