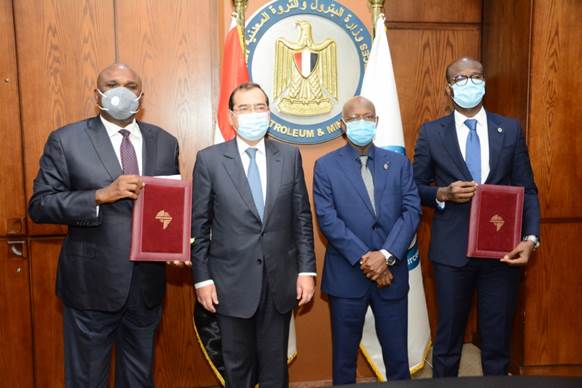 A Framework Agreement was signed on December 1st in Cairo between the African Export-Import Bank (Afreximbank), the pan-African multilateral EXIM bank, and the African Energy Investment Corporation (AEICorp), an affiliated entity of the African Petroleum Producers’ Organization (APPO) that was established to support the development of Africa’s hydrocarbon and energy sectors.

The Agreement was signed by Professor Benedict Oramah, President and Chairman of the Board of Directors of Afreximbank and Mr. Zakaria Dosso, Managing Director of AEICorp in the presence of H.E Tarek El Molla, Minister of Petroleum and Mineral Resources and H.E Dr. Omar Farouk, Secretary General of the APPO. It enables Afreximbank and AEICorp to collaborate in areas of common interests, coordinate their various initiatives in Africa, and foster sustainable capacity of African countries.

H.E Tarek El Molla, Hon. Minister of Petroleum and Mineral Resources expressed his happiness that Egypt had been selected by the APPO’s ministerial council to lead the negotiations between the different parties. He emphasized that Egypt would continue to work on enhancing cooperation among African Countries as part of its role towards the African Continent.

Commending the Egyptian Minister for Petroleum and Mineral Resources for the leadership role he played in getting the agreement concluded, H.E Dr. Omar Farouk, Secretary General of the APPO noted that the event marked a watershed in the quest for cooperation and collaboration among development institutions on the African continent.

The Framework Agreement will enable the development of a solid plan with the aim of pushing investment across Africa in the energy and mining sectors; nevertheless, Afreximbank has taken upfront moves to create an alliance of banks to boost this promising plan. This alliance of joint banks will cover the geographical scope of the entire African continent, in addition to other countries outside Africa.

Speaking during the signing ceremony, Prof. Benedict Oramah, President of Afreximbank, said that the Bank’s solid experience in financial advisory services would allow AEICORP to mobilize the funds necessary to initiate its activities as well as successfully run the corporation‘s debt and equity investment operations across its target sectors.

“Afreximbank is proud to be part of this effort and is eager to provide AEICORP the benefits of its knowledge of the Continent; knowledge of financing extractive industries; and skills in structuring complex transactions,” stated Prof. Oramah. “Afreximbank‘s support will include cooperating with AEICORP to facilitate market penetration plans as well as developing projects across Africa. The Bank is looking forward to working alongside AEICORP for the development and transfer of skills, and the leveraging of existing relationships to fast track the institutionalization of AEICORP on the Continent,” he added.

Mr. Zakaria Dosso, Director of the AEICORP expressed deep appreciation to the Minister El Mollah for his guidance and support in the negotiation process and assured that AEICorp was determined to transform the African energy scene. He regretted the fact that Africa had the largest number of people without access to modern energy even when the continent was blessed with abundant energy resources. “Without energy, we cannot take Africa to the next level,” concluded Mr. Dosso.