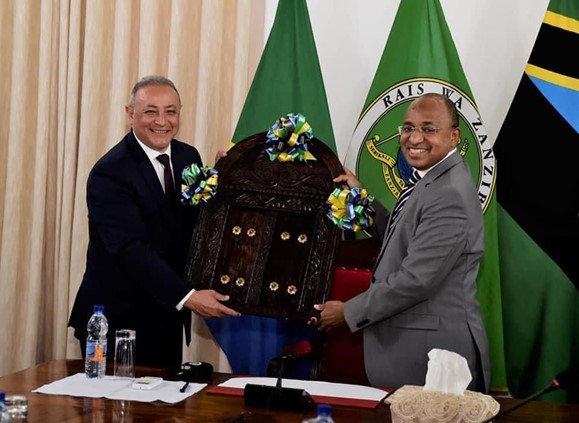 African Export-Import Bank (Afreximbank) and the Revolutionary Government of Zanzibar have agreed to collaborate to industrialize and diversify Zanzibar’s economy.

The overarching objective being to assimilate the country’s manufactured value-added goods and services into regional and global value chains.

Mr. Amr Kamel, Afreximbank‘s Executive Vice President in Charge of Business Development & Corporate Banking, led a three day mission to Zanzibar (16th – 18th February 2022) during which he met with the President of Zanzibar and the Chairman of the Revolutionary Council, His Excellency Dr Hussein Ali Mwinyi.

During the meeting, Mr. Kamel reiterated the Bank’s commitment to develop trade-enabling infrastructure projects, facilitate trade and trade finance with the aim of actualizing the country’s aspirations of being an upper middle-income status by 2050 as espoused under its Zanzibar Development Vision 2050.

A key highlight of the mission was the signing of the US$ 5 million Afreximbank Trade Facilitation Programme (AfTRAF) facility between Afreximbank and People’s Bank of Zanzibar (PBZ). This marked the Bank’s first facility in Zanzibar, which PBZ will deploy to support imports into Zanzibar, boost intra-African trade and facilitate the purchase of equipment and raw materials to support the production of goods for both local sales as well as export.

In addition, the Bank and the Revolutionary Government of Zanzibar represented by the Ministry of Trade and Industrial Development signed a memorandum of understanding for a Joint Project Preparation Facility (JPPF), to fund the preparation of bankability studies to support the establishment 2 industrial parks – located in Unguja and Pemba – expected to be commissioned by 2023.

Mr. Amr Kamel, Executive Vice President, Afreximbank, said: “the Revolutionary Government of Zanzibar has clearly articulated its investment priorities and would like these to be given immediate attention to spearhead the country’s development agenda under Zanzibar Development Vision 2050.

“Afreximbank is keen to work closely with the Revolutionary Government of Zanzibar to ensure that the identified priority projects are successfully implemented in a timely manner. By supporting the Zanzibari institutions to facilitate and promote trade, Afreximbank is not only pursuing its core mandate, but will also play an instrumental role in financing the development of trade-enabling infrastructure to ensure a resilient economic growth with positive spill over effects in Zanzibar, United Republic of Tanzania, East Africa and beyond.”

Ehanire To Submit Report On Local Vaccine Production In May