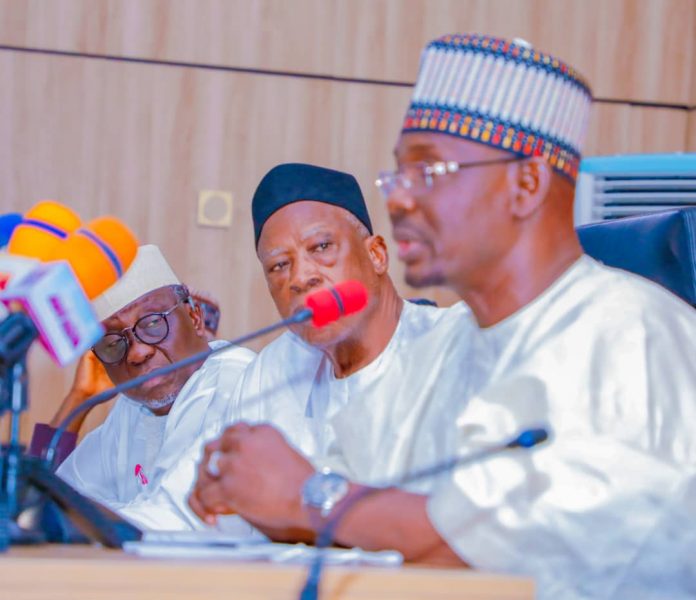 Ahead of today’s state congress for the ruling All Progressives Congress (APC), the caucus of the party in Nasarawa State, has yet again, adopted consensus to elect the state executive committee of party.

The APC state caucus made this known during a meeting with critical stakeholders, which held at the Government House, on Friday.

TheFact Nigeria reports that this is just as the Chairman of the State Congress Committee from the national secretariat of the APC, Abdullahi Garba Abbas, disclosed that Nasarawa State was rated first in the country, for the peaceful conduct of the local government congresses.

In his remarks during the meeting, Nasarawa State governor, Engineer Abdullahi Sule, appreciated the stakeholders of the party in the state for choosing to retain the consensus arrangement for the state congress.

Engineer Sule explained that, the decision to adopt consensus, was arrived at after careful deliberation, with a view to ensuring a smooth, hitch free state congress.

He disclosed that, as part of the agreements reached by the stakeholders, the APC will retain its present zoning arrangement for party offices, as well as ensure fair distribution of the 16 principal officers of the party across the 13 local government councils.

The governor used the opportunity of the meeting, to thanked those aspirants who were made to drop their aspirations because of the internal zoning arrangement of the party, appreciating them for putting the interest of the party and state above personal interest.

He assured that his administration will soon compensate party members who worked hard to make the APC successful in the ward, LG congresses, as well as the recently conducted local government councils election, through appointment as PAs, SAs, SSAs and commissioners.

Engineer Sule thanked the state congress committee and the party’s stakeholders, for ensuring that the party conducted successfully all the previous congresses, leading to the state emerging tops in the country.

Earlier speaking, immediate past governor of the state, Senator Umaru Tanko Al-makura, while moving the motion for the adoption of consensus for the state congress, said the decision was a culmination of untiring activities over the months, since the ward congresses started.

He commended Engineer Sule, being the leader of the APC in the state, for ensuring the rationalisation and fair distribution of party offices across the 13 local government areas, with a view to achieving fairness and equitable consideration through consensus.

Senator Al-makura appreciated the team from Abuja, who he said, are in Nasarawa State to guide the party through the due process for a proper democratic election.

Also speaking, first civilian governor of the state, Senator Abdullahi Adamu, said the decision taken by key stakeholders, which was being presented before the caucus, were adequately canvassed and discussed.

According to Senator Adamu, having considered all the available options, the caucus has agreed that the consensus approach that has served the state well, be retained.

Earlier, in an opening remarks, Chairman of the State Congress Committee, Abdullahi Garba Abbas, described the previous congresses held in the state as peaceful, fair and a representation of the people’s mandate.

He commended the governor, government and people of the state, for giving the committee maximum support during the past congresses, expressing hope for a hitch free state congress.

The chairman used the opportunity to outline the nature and composition of the state congress.

In his opening address, State Interim Caretaker Committee Chairman of the APC, Dr John Mamman, thanked all the party’s stakeholders and members, for the support rendered the party that resulted in the successes recorded during the ward, LG congresses, as well as local government elections.

Destiny’s Child Stage Costumes, Others’, To Be Auctioned In June

The newly appointed Minister of Niger Delta Affairs (MNDA), Obong Umana Umana has indicated his resolve to be result oriented and impactful within the...