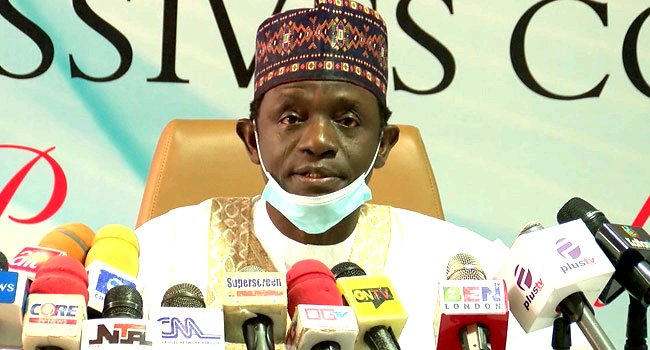 The All Progressives Congress (APC) has described as unfortunate the internal party crisis that resulted in the emergence of the National Caretaker Committee, which therefore has distracted public attention from appreciating monumental strides that President Muhammadu Buhari-led government has recorded.

This was revealed in a statement on Sunday, signed by its Deputy National Publicity Secretary Yekini Nabena, in Abuja. APC called on its members nationwide to support Governor Mai Mala Buni-led Caretaker/Extraordinary Convention Planning Committee (CECPC) to fully exposition the governing party.

The statement urged maximum support from party members to ensure that the ongoing national reconciliation process being undertaken by the CECPC is sustained, successful and continue to yield results.

“Ahead of the planned APC National Convention and indeed the 2023 General Elections, stakeholders should continue to support the CECPC efforts to unite the party in order to make it formidable enough to consolidate on the APC’s national governing status and landmark achievements.

“The APC must not go into a National Convention, and indeed a general election in crisis. We should take it one step at a time and ensure that the ongoing national reconciliation process being undertaken by the CECPC is sustained, successful and continue to yield results.

“Also, the CECPC has resuscitated the Party’s internal dispute resolution mechanisms and has set up reconciliation committees for Oyo, Edo, Ondo, Imo, Ogun, Ekiti among other States chapters with reported disputes. The Committees are already meeting with the key stakeholders in the various states and has achieved substantial reconciliation in many states.

“The success stories of the ongoing reconciliation efforts abound. Case points are Cross River State where the CECPC reconciled the two factions and appointed a State Caretaker Committee led by Sen. Matthew Mbu (Jnr.) as acting State Chairman. In Ondo State, all the Governorship aspirants were brought together, campaigned and worked for the successful re-election of the APC Candidate, Governor Rotimi Akeredolu (SAN).

“In Akwa Ibom State, the CECPC brought together all the contending interests under one roof and achieved true reconciliation. Today, in Akwa Ibom, leaders such as Sen. Godswill Akpabio, Obong Nsima Ekere, Mr. Umana O. Umana, Sen. Ita Enang, Barr. Bassey Dan Abia (Snr) among others are working together and in collective pursuit of Party interests.

“At the national level and on the auspices of the CECPC, the Minister of Transportation, Rt. Hon. Chibuike Rotimi Amaechi and Minister of State for Petroleum Resources, Chief Timipre Sylva have resolved in Party interest to work together and strengthen the Party, particularly in the South South geo-political zone.”