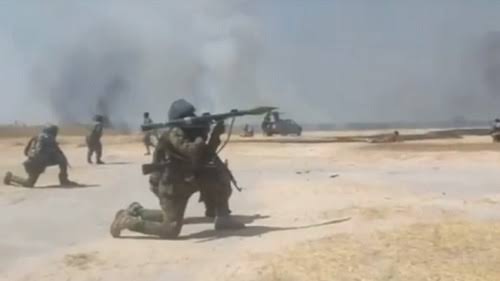 Sequel to the commencement of Operation Fire Ball, a subsidiary operation under Operation Lafiya Dole which is meant to clear the remnants of the Boko Haram and Islamic State West Africa Province (ISWAP) terrorists from their identified enclaves in the Northeast region, Operation Fire Ball has steadily progressed and satisfactorily too with significant results within the short period from its inception.

The disclosure was contained in a statement, following a press briefing earlier today at the Defence Headquarters, to update the general public on the recent activities of the Armed Forces operatives, and signed by the acting director, Defence Media Operations, Brigadier General Bernard Onyeuko. According to the statement, the last 3 weeks of this month has proved to be a significant period against the criminals as a result of the more successful operations conducted within this period.

Brig. Gen. Onyeuko intimated that the gallant troops of Operation Fire Ball, in the various Sectors of the Theatre, have continued to dominate the general areas of operation and carry out their tasks relentlessly and professionally. The successes so far achieved were made possible with the commitment and gallantry exhibited by the well motivated troops within the period under review. The troops have carried out aggressive clearance operations, ambushes, robust day and night patrols in order to finally decimate the remnants of the Boko Haram/ISWAP criminals.

Following the aggressive offensive actions carried out by the troops, several terrorist elements have been neutralized and a large number of their equipment were captured, including large quantities of their logistics consignments which were intercepted by the gallant troops. Most importantly, a number of women and children hitherto held captive were rescued unhurt. In this regard, a total of 23 Boko Haram/ISWAP terrorists were neutralized while one terrorist Improvised Explosive Device (IED) expert was captured alive during an encounter. Equally, the gallant troops courageously intercepted some Boko Haram criminals while attempting to collect ransom from relations of their abducted victims leading to the decimation of the criminals and successful rescue of 2 women and 3 children unhurt.

Unfortunately, 6 gallant soldiers were wounded in action over the period. However, the wounded soldiers have since been evacuated to a military medical facility and are currently responding positively to treatment.

The troops of Operation Fire Ball under Operation Lafiya Dole, were commended for the resilience, doggedness and professionalism exhibited by them since the beginning of the Operation, while being equally encouraged not to relent but build on the successes recorded so far.

‘The entire populace of the Northeast region are hereby assured of the determination of the Nigerian military high command to finally rout the remnants of Boko Haram/Islamic State’s West Africa Province criminals from their enclaves in the zone. They are equally encouraged to avail the troops with credible information that will help in the execution of the operation’.

‘To you the members of the Press, we want to thank you most profoundly for your cooperation and commitment in sensitizing the general public of these activities. We will however continue to solicit for your cooperation in our information dissemination. You are well appreciated’, the statement read.