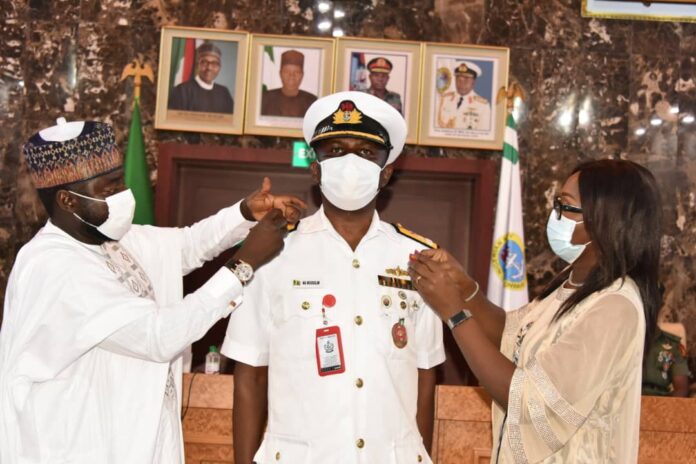 The Minister of Defence, Major General Bashir Magashi (rtd) has charged the newly promoted Rear Admirals of the Nigerian Navy (NN) to brace up for the added responsibility that comes with promotion.

The Minister stated this during the decoration ceremony of the 18 Commodores elevated to the two-star flag rank of Rear Admiral in the NN held at the Naval Headquarters.

While delivering his remarks as the Special Guest of Honour at the event, the Minister reminded the newly decorated senior officers that promotion in the military is a reward for hard work, dedication, patriotism and loyalty to the Service and country.

He congratulated them and also reminded them of the daunting security challenges facing the nation, particularly the maritime environment.
In this regard, he called on them to contribute their quota to the NN’s resolve to rid the nation’s maritime domain from criminalities, as one of the ways they can give back to the society that has been so kind to them and justify the confidence of the system that adjudged them worthy of this highly revered recognition.

In his welcome remarks, the Chief of the Naval Staff (CNS), Vice Admiral Ibok-Ete Ibas emphasized that the occasion was a crowning glory for the newly decorated senior officers’ hard work and total dedication to the Service and by extension, the nation.

He equally observed that the year 2020 witnessed disruption in all facets of our national lives with the armed forces now more than ever before required to play significant roles to ensure security and prosperity of the nation. Hence, he called on the officers to bring their ingenuity, resourcefulness and integrity as senior officers of the NN to reposition the Service in order to discharge its constitutional role for the security and prosperity of Nigeria

The CNS, however, warned personnel that any collusion with criminals or sabotage of measures emplaced to checkmate illegalities will be met with stiff sanctions in accordance with the laws of the land.

He therefore reminded the newly decorated senior officers to remain above board and ensure that their subordinates equally buy into the zero-tolerance stance of the NN against all forms of illegalities and criminalities at sea and ashore.

The CNS further acknowledged the support availed the Service by the government which he said has bolstered gains in critical areas like manpower development, fleet renewal and infrastructural development which have impacted positively on operational service delivery and the nation’s posture at sea.

Meanwhile, a representative of the newly decorated senior officers, Rear Admiral Adesola Adesope appreciated everyone who contributed in one way or another for their attainment of this status in the NN.

PENGASSAN Strike Will Not Lead To Fuel Scarcity -NNPC