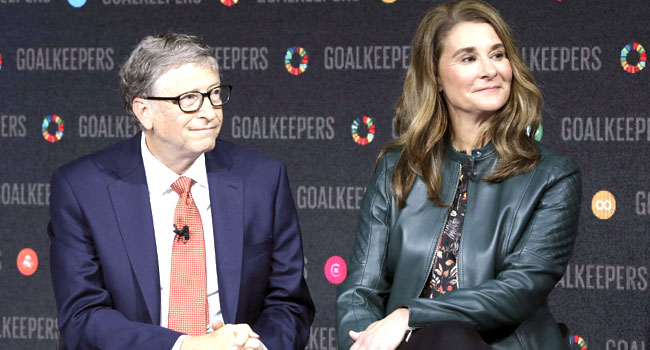 Billionaire benefactors Bill and Melinda Gates, co-founders of one of the world’s largest private charitable foundations, filed for divorce on Monday after 27 years of marriage.
The duo made this known yesterday via their official twitter handles in  a joint statement signed by them.
“After a great deal of thought and a lot of work on our relationship, we have made the decision to end our marriage…
“We no longer believe we can grow together as a couple in the next phase of our lives. We ask for space and privacy for our family as we begin to navigate this new life,” they said.
Even though the actual cause of the split remain unkown, they pledged to continue their philanthropic work together.
TheFact Nigeria gathered that in a joint petition for dissolution of marriage, the couple asserted their legal union was “irretrievably broken,” but said they had reached agreement on how to divide their marital assets. No details of that accord were disclosed in the filing in King County Superior Court in Seattle.
Bill Gates, 65 and Melinda French Gates, 56, met after she joined the software giant as a product manager, and they dated for a few years before marrying in January 1994 in Hawaii.
They had three children together; Jennifer 25, Rory 21 and Phoebe Gates 18.
Jennifer Gates, the eldest daughter of Bill and Melinda Gates, has described her parents’ divorce as a “challenging stretch of time” after the shocking announcement.
She took to Instagram to share how she is dealing with the divorce news and to request privacy as they “navigate the next phases of our lives”.
“I’m still learning how to best support my own process and emotions as well as my family members at this time and am grateful for the space to do so,” she said on an Instagram story.
She added that the kind words and support from people “mean the world to her”.
Bill is a co-founder of Microsoft Corporation and the fourth richest person in the world, he is estimated to be worth $US130.5 billion ($A168 billion), according to Forbes.
Melinda is a former general manager at Microsoft Corporation, she is an author and has consistently been ranked as one of the world’s most powerful women by Forbes.
The Bill & Melinda Gates Foundation was established in Seattle in 2000. The foundation focuses primarily on public health, education and climate change. Its grants included some $1.75bn to vaccine initiatives and research during the Covid-19 pandemic. They have backed widely praised programs in malaria and polio eradication, child nutrition and vaccines.