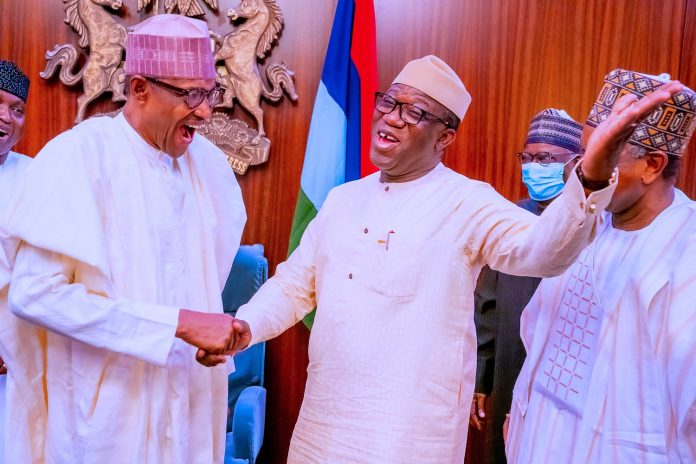 Despite the vote buying and voter apathy that greeted the just concluded Ekiti Gubernatorial election, President Muhammadu Buhari was seen celebrating the All Progressive Congress (APC) for Victory at the polls.

The presidency said, the joy of electoral victory was savored at the State House, Abuja, Monday, as President Buhari received Governor-elect Biodun Oyebanji, in audience.

The Presidency on its official twitter account @NGRPresident informed that the newly-elected Governor was led to the event by Chairman of APC, Sen. Abdullahi Adamu, Governors Kayode Fayemi, Atiku Bagudu, and Mohammed Badaru Abubakar of Ekiti, Kebbi, and Jigawa States, respectively.

Buhari was quoted to have keenly followed the polls held on Saturday, June 18, and was delighted with the orderly conduct, and the way the electorate and security agencies comported themselves.

“I loved how the APC Governors mobilised, and supported you,” the President told Oyebanji. “I think the party is very lucky, and things are getting better. I congratulate the Chairman, and I pray you sustain it,” he said.

This was inspite of the reports of vote buying that was noticed across many polling units in Ekiti State on Saturday.

Even the News Agency of Nigeria (NAN) correspondents, who monitored the election was quoted to have reported that vote buying were recorded in many polling centres visited.

Primetimes also reported that concerned individuals, who are also voters, alleged that some people believed to be working for politicians, suddenly arrived various polling centres and offered money to induce those already on queues to vote for their candidates.

Nigerians expect Buhari as a leader to speak against it so it doesn’t escalate in the forthcoming Osun and 2023 general elections, but the President kept mute on it.

Instead, Sen. Adamu ascribed all the glory for the election victory to God, and pledged that same would be replicated in Osun State next month.

In his capacity as Chairman of the Campaign Council for Ekiti, Gov Badaru congratulated President Buhari on the successful outing, saying:

“Your unending effort to reposition the party is paying off. If we combine the votes of the candidates that came second and third, our candidate still beat them by a wide margin. APC is being daily endeared to Nigerians. Our gratitude goes to you, Mr President”.

Governor-elect Biodun Oyebanji, while appreciating President Muhammadu Buhari, said the election was a referendum on the party, “and a clear, positive signal to the election in Osun, and the National one next year. APC is still the party of choice.”

Oyebanji lauded the President “for the leadership and the level playing field you provided,” adding that he would be magnanimous in victory, as earlier advised by President Buhari.