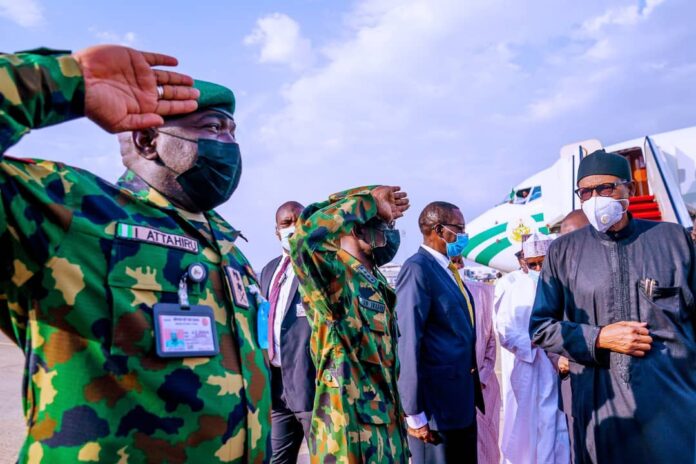 President Muhammadu Buhari has returned to  Nigeria  two weeks after his medical trip to London.

Buhari who arrived on Thursday was  received  at the  Nnamdi Azikiwe International Airport at about 4.45 pm by Ibrahim Gambari, his chief of staff; Muhammed Bello, minister of the federal capital territory (FCT); Babagana Monguno, national security adviser, and other security chiefs.

TheFact Nigeria  recalled that the president departed for the UK on March 30 for his routine medical check up.

The former military head of state has spent over 170 days on medical trips abroad since he became president in 2015.

The president has been criticised severally for travelling for medical treatment at a time when medical doctors in the country were preparing for a nationwide strike.

According to the presidential aide, Bashir Ahmad who shared photos from the President’s arrival  via his twitter handle @BashirAhmaad said, “President Muhammadu Buhari has returned to Abuja this afternoon, after a private trip to London, the United Kingdom.