The Chief of the Air Staff (CAS), Air Marshal Sadique Abubakar, has charged newly graduated personnel of Intermediate and Advanced Communication and Information Systems (CIS) Courses at the Air Force Institute of Technology (AFIT), Kaduna to bring the skills acquired during their training to bear in enhancing the conduct of the NAF’s operations.

The Director of Public Relations and Information, Nigerian Air Force, Air Commodore Ibikunle Daramola in a statement quoted, the CAS to have stated this yesterday, 7 July 2020, while speaking during the Graduation Ceremony of 82 personnel who recently completed Intermediate and Advanced CIS Courses at AFIT.

Speaking further, the CAS noted that effective military communication was a key requirement for any successful military enterprise, including the projection of Air Power.

He observed that having such effective communication required personnel with the appropriate skillsets. He stated that the current NAF leadership had, from inception, accordingly placed emphasis on the development of human capacity in all areas that would ensure the effective and efficient employment of air power, when required.

In this regard, the CAS said, the NAF had consistently trained personnel both locally and abroad, noting that the successful execution of air operations in theatres across the Country was a testament to the efficacy of the NAF’s current capacity building initiatives.

“In recent times, the NAF’s effort in enhancing capacity of CIS personnel has led to the training of 4 Information Technology officers on Advanced Software Development at the Academy Computer Training Centre, Miami Florida, United States of America (USA) and 5 others on Advanced Cyber Security at the Institute of Information Security, Maharashtra Pune, India”, Air Marshal Abubakar said.

He further disclosed that the NAF had trained 4 Communications personnel on Forward Looking Infra-Red (FLIR) Camera Intermediate Maintenance Course in the USA, while Chinese Electronics Import and Export Corporation had trained 3 officers and one Senior Non Commissioned Officer in China on Radar systems. 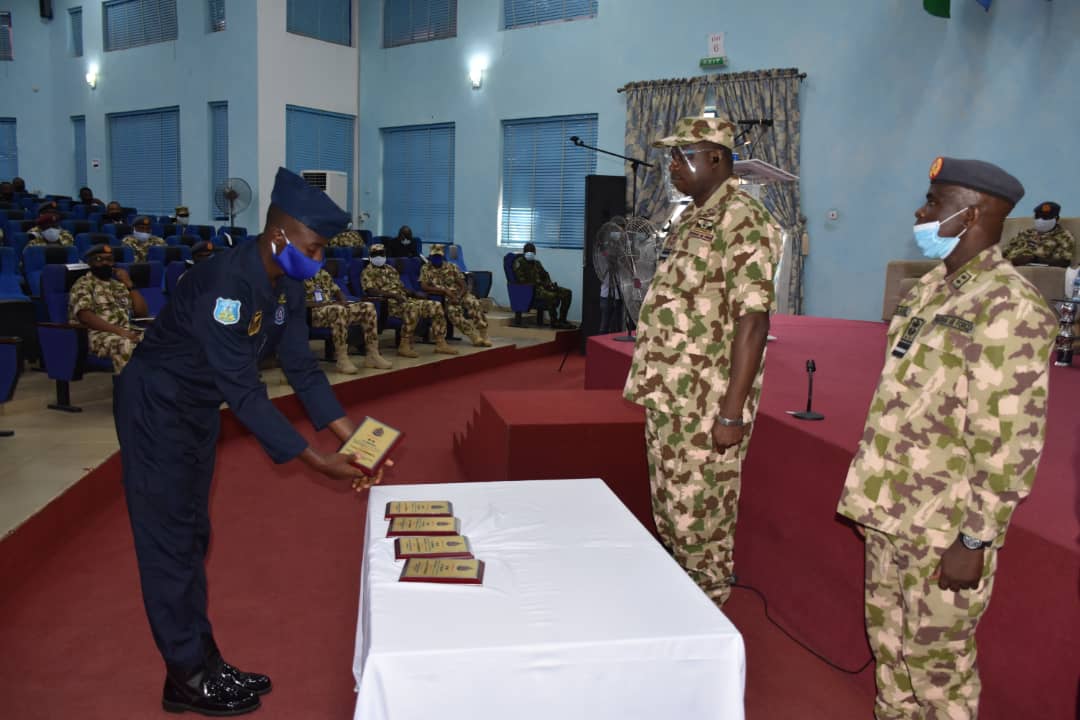 The CAS also revealed that 5 CIS officers were undergoing various courses in China, in addition to a total of 20 others who were trained in-country by the FLIR Company US on Airborne Tactical Observation Systems and were currently deployed to various theatres of operation across the Country.

He remarked that the knowledge acquired in the various courses of training would boost capacity of NAF CIS personnel so that such courses could eventually be conducted at AFIT, thereby saving scarce national resources.

The CAS further observed that the technical courses being conducted at AFIT were already proving crucial towards reducing the dependence on foreign expatriates, while also building the confidence of NAF personnel.

He promised that training facilities at the Institute would be upgraded to further improve the practical experience of future students.

While congratulating the graduands for their determination and tenacity to work through to the end of the Course, Air Marshal Abubakar reminded them that they would be deployed to support ongoing NAF operations either directly or indirectly.

He therefore charged them to remain highly professional, focused and disciplined.

“You must bring to bear the skills you have acquired during your training here at this prestigious Institute in the discharge of your duties. It is therefore my sincere expectation that as you go to the field, you will be good and worthy ambassadors of AFIT,” the CAS said.

He also reminded all personnel to support the Government’s efforts in the fight against COVID-19 by ensuring total adherence to stipulated guidelines; including the wearing of face masks, observance of social/physical distancing when in public places as well as the avoidance of unnecessary inter-state movements.

Erarlier in his welcome address, the Commandant AFIT, Air Vice Marshal Abdulganiyu Olabisi, stated that the objective of the courses was to improve on the skills acquired by the airmen and airwomen from their basic courses.

According to him, following the basic training, they had been posted to various units for hands-on experience. The intermediate and advanced courses, he said, provide the airmen/airwomen with the skill and knowledge that would enable them carry out more specialized functions as they handle higher responsibilities.

He noted that the resources were optimized to ensure satisfactory coverage of the theoretical and practical aspects of the courses.

In spite of the challenges faced in the course of the training, the Commandant remarked that AFIT is totally committed to the task of human capacity development through robust and result oriented training for enhanced professional performance.

He thanked the NAF leadership, as well as Headquarters Air Training Command and the 441 Communications Group, for the immense support and timely response to their requests.

Highlights of the Graduation Ceremony include the conferment of certificates on the graduands as well as the presentation of awards to the best graduating students in each of the Courses.