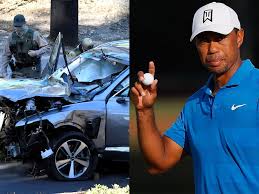 Tiger Woods “awake, responsive and recovering in his hospital room” following surgery on the serious injuries to his right leg. Hospital chief reports that Woods had “open fractures affecting the upper and lower of the tibia and fibula bones”

Aerial footage of Woods’ accident shows a car on its side with the front end heavily damaged, airbags appeared to be deployed and the wreckage appeared to be just off the side of a road on a hillside.

Aerial footage of Tiger Woods’ accident shows a car on its side with the front end heavily damaged, while the airbags appeared to be deployed and the wreckage appeared to be just off the side of a road on a hillside

Tiger Woods is recovering from surgery on “significant injuries” to his lower right leg sustained in a serious car crash in California on Tuesday morning.

Woods suffered multiple fractures in the horrific accident, when he careered off the road “at high speed” and was lucky to survive as his car rolled several times before coming to rest on an embankment.

The 45-year-old, who was on his way to Rolling Hills Country Club for a publicity shoot when the crash happened shortly after 7am local time, was pulled from the wreckage by emergency services and rushed to Harbor-UCLA Medical Center for surgery.

The accident happened shortly after 7am Pacific Time Woods was driving, no passengers, no other vehicles involved He lost control of his car “at high speed”, the vehicle rolled several times and sustained “extensive damage ” He was conscious and able to communicate when emergency services arrived at the scene Fire fighters pulled Woods from the overturned car after smashing the windscreen with an axe Woods was taken to Harbor-UCLA Medical Center for surgery Woods suffered significant orthopaedic injuries to his “right lower extremity” LA County Sheriff said there was no obvious sign that Woods was impaired by drugs or alcohol.

A statement issued on Woods’ social media platforms detailed the extent of his injuries, with chief medical officer Anish Mahajan giving an update on the complicated procedure after the golfing superstar had come out of surgery.

The statement also made it clear that Woods was “awake, responsive, and recovering” following the operation.

“Mr Woods suffered significant orthopaedic injuries to his right lower extremity that were treated during emergency surgery by orthopaedic trauma specialists at Harbor-UCLA Medical Center, a level 1 trauma center,” said Dr Mahajan, who is also the interim CEO at the medical centre.

“Comminuted open fractures affecting the upper and lower of the tibia and fibula bones were stabilised by inserting a rod into the tibia. Additional injuries to the bones of the foot and ankle were stabilised with a combination of screws and pins.

“Trauma to the muscle and soft tissue of the leg required surgical release of the covering of the muscles to relieve pressure due to swelling.”

The statement added: “Tiger Woods is currently awake, responsive and recovering in his hospital room.

“We thank everyone for the overwhelming support and messages during this tough time. Thank you to the wonderful doctors and hospital staff at UCLA Medical Center, the Los Angeles County Sheriff’s Department, and the Fire Department. Your support and assistance has been outstanding.

“There are no further updates at this time and we continue to thank you for your well-wishes and privacy for him and his family.”

The LA County Sheriff’s department insisted there was no obvious evidence that Woods was impaired by drugs or alcohol at the time of the crash, and that he was initially unconcerned by his injuries.

“It’s very fortunate that Mr. Woods was able to come out of this alive,” said Deputy Carlos Gonzalez, one of the first to arrive at the crash site. “When I arrived on the scene, Mr Woods was seated in the driver’s seat. I made contact with him, and I ensured that he was able to speak to me. At that time, he seemed as though he was still calm and lucid.

“He didn’t seem concerned of his injuries at the time, which is not uncommon in traffic collisions – many times people tend to be in shock. It’s a traumatic experience, so it’s not uncommon for people to be focused on unimportant things, or even if they are in pain they might not feel it until much later.

“The nature of his vehicle, the fact that he was wearing a seat belt, I would say that it greatly increased the likelihood that it saved his life.”

Woods has been in Los Angeles as tournament host for last week’s Genesis Invitational at Riviera Country Club, but he is currently unable to play, or even practice, following further back surgery towards the end of December.

Consultant knee trauma surgeon Chinmay Gupte explains the challenges that Tiger Woods will face when he begins his recovery.

After presenting Max Homa with the winners’ trophy on Sunday, Woods had agreed to two extra days in Los Angeles to take part in media shoots with Golf Digest and GolfTV at Rolling Hills Country Club, where he gave tips to celebrities and accompanied former NBA star Dwayne Wade during a round of golf.

He was heading back to Rolling Hills CC for day two of the shoot when the accident happened.

Woods was also forced to sit out last month’s Farmers Insurance Open, and in an interview on Sunday, the 45-year-old admitted he had not yet set a date for a return to competitive golf, with the Masters just seven weeks away.

“There is no timetable, that’s one of the more frustrating things. I’m just waiting for another MRI to see if the annulus has scarred over and sealed,” Woods said. “Once that happens, then I can dedicate to start doing more.”

Dangote To Give A Facelift To Abiola Stadium In Abuja