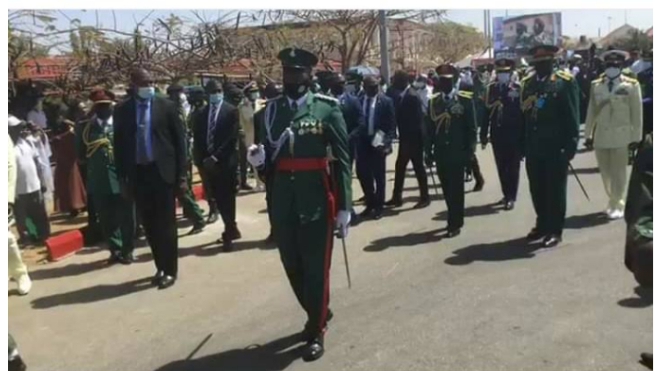 The ceremonial Pulling-Out Parade took place today, 16 February 2021 at the Mogadishu Cantonment, Abuja, and was the climax of events to mark the final exit and disengagement of the former CDS from the Nigerian Army after 40 years of meritorious service to the Armed Forces of Nigeria (AFN).

The immediate past CDS, in his valedictory speech at the event, attributed ed his long and successful career in the AFN to the uncommon grace and favour of Almighty God, as well as the magnanimity of President Muhammadu Buhari, who found him worthy to be appointed as the 16th Chief of Defence Staff of the Armed Forces of Nigeria.

TheFact Nigeria reports that Gen. Olonisakin’s ability to maintain the AFN under his command and reclaim territories that were hitherto under the control of Boko Haram Terrorists (BHTs) was made possible with the support of the political leadership.

According to him, the AFN under the current political dispensation has been transformed by building capacity and gaining valuable experience in fighting asymmetric threats which transited from fighting conventional war on land, sea and air to capacity to containing cyber-security threats.

The former Defence Chief, further disclosed that the operationalization of various military alliances between Nigeria and her neighboring countries, especially in the Lake Chad Basin Commission was achieved through military and defence diplomacy, by applying a whole-of-government approach to addressing the insurgency and terrorism that has continued to plague major parts of the country. This, he said had been the overall strategy of the Nigerian Government, and these efforts led to improved regional cooperation and the strengthening of the Multinational Joint Task Force (MNJTF).

Olonisakin pointed out that the establishment of close interaction and liaison with other strategic partners such as the P-3 Partners comprising the United Stated of America, United Kingdom and France and some Middle East countries as well as South Africa was in the overall interest of the AFN and in furtherance of Nigerian national security efforts.

He expressed sentiments of gratitude to his former counter-parts within the African continent, for supporting the AFN in its counter-insurgency and counter-terrorism campaigns.

“We have therefore built a solid foundation on which the current, and indeed, future generations of Nigerian military commanders can build, in the performance of their constitutional roles of defending our dear nation from both external and domestic threats to our corporate existence”, Olonisakin stated.

Gen. Olonisakin (rtd) further posited that the establishment of DHQ Special Forces Brigade and its deployment to the Gambia in 2017 for Operation Restore Democracy enabled the restoration of democracy in that country following the aftermath of an election crisis.

On the welfare of personnel of the AFN, the former CDS said his administration embarked on numerous office and residential accommodation, approval of an improved Terms and Conditions of Service and Manual of Financial Administration for the AFN.

He expressed appreciation to the Minister of Defence, members of the National Assembly, especially the Senate and House Committees on Defence for their support throughout his tenure in office.

He equally thanked the immediate Service Chiefs and the Chief of Defence Intelligence for their unwavering commitment to duty while in office.

The former CDS lauded the efforts, contributions and sacrifices of personnel of the AFN, veterans and civilian staff as well as troops in the various theatres of operation, urging the new military leadership to continue to provide the needed support to the families of military fallen heroes.

Gen. Olonisakin, a member of 25 Regular Course of the Nigerian Defence Academy (NDA), thanked his course-mates for their inputs and service, describing them as his strategic team ‘A-Team’ which he said constituted members of the future Plans Committee.

Highlights of the ceremony included review of the parade by the immediate past CDS, march past in slow and quick time by 4 Guards comprising Nigerian Army, Navy and Air Force, and the pulling-out of the former CDS and his wife, Mrs Omobolanle Olonisakin.