The Executive Chairman of the Economic and Financial Crimes Commission, EFCC, Mr. Abdulrasheed Bawa has charged all staff of the Commission to be disciplined and dedicated to their duties.

In his first interface with staff on Monday, March 8, at the headquarters upon assumption of office, the EFCC boss expressed delight at the goodwill exhibited by staff over his appointment.

TheFact Nigeria noted that Bawa warned staff against taking his generally friendly disposition for granted, as he was going to be firm and would have zero tolerance for any form of indiscipline, including lateness to work as well as improper or indecent dressing.

“The rule says you must be in the office by 8am and close by 5pm if you have no pending work. But it is unacceptable for you to come in by 9am and close by 3pm and you expect to earn a full salary,” he warned.

He said, he was well aware of the agency and its challenges, but assured that the challenges were surmountable. Nevertheless, he pointed that his mission was not to undo what had been done by his predecessors but to seek to improve the fortunes of the Commission, going forward.

The EFCC boss called for a renewed commitment to the anti-graft campaign by all staff through dedicated service devoid of sloppiness and other forms of indiscipline. 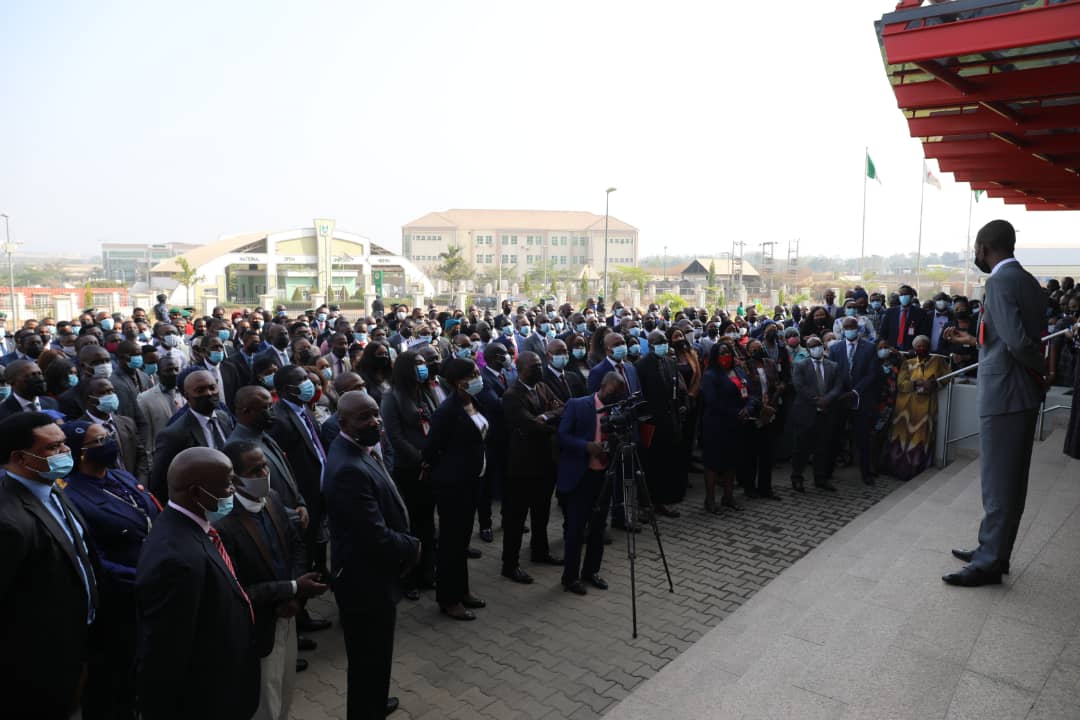 “All Staff are important in this fight against corruption from the top to the least. So, I invite everyone to bring ideas and best practices that will help to organize and recalibrate the Commission in order to make it a better place. I am a part of you and I know the challenges,” he said.

Bawa assured that he would operate an open – door policy for easy access by staff, and followed up on this assurance by publicly giving out his telephone number.

He also promised the prioritization of staff welfare and systems improvement through application of digital technology and intelligence during his tenure, and disclosed that a Directorate of Intelligence would soon be created as the hub of Intel creation to bolster the Commission’s investigation activities.

He equally revealed that staff training will receive new fillip while the prospect of getting Insurance cover for staff would be explored to mitigate the dangers staff are exposed to in the discharge of their duties.

The EFCC chairman used the forum to feel the pulse of the Commission by taking questions from various categories of staff, and promised to address most of the issues raised.

He was also at the Abuja Zonal Office and the EFCC Academy where similar meetings took place.

At Idiagbon House, home of the Abuja Zonal office, Bawa was received by the Zonal Head, Ahmed Sa’ad Abubakar and other senior officers. Addressing the staff, he appreciated them for the goodwill messages sent to him on his appointment and enjoined all to embrace the enormous challenges ahead.

He encouraged staff to be dedicated to their duties, by upholding the Commission’s core values and imbibing good work ethic.

At the Academy, He was received by the Commandant, Ayo Olowonihi, who expressed delight that the Executive Chairman was able to visit the Academy a few days after assuming office. He congratulated Bawa and pledged the loyalty and support of the Academy staff to the Commission.

Addressing the staff, after he was conducted round the Academy, Bawa promised to reinvigorate the institution by giving it a face-lift, and properly position it as a Centre of Excellence for EFCC staff training.

He urged the staff to be dedicated, shun all vices and report unethical behaviour to appropriate authority.