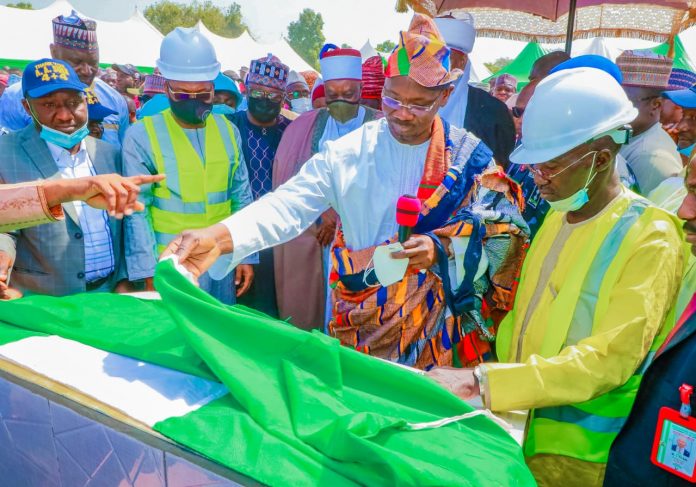 Nasarawa State governor, Engineer Abdullahi Sule, has flagged off the construction of the 24km Idadu/Agbashi road, in Doma Local Government Area of the state, estimated to cost the government N3.2bn.

Engineer Sule performed the groundbreaking ceremony for the construction of the road, in Idadu, Ekye Development Area, on Friday.

TheFact Nigeria reports that while noting that the project was in fulfilment of the promise he made to the people of the area during the campaigns leading to the 2019 general election, the governor charged the contractor handling the work, Road and Bridge International Nigeria Limited, to deliver top quality job, within the 12 months stipulated for the completion of the work.

Engineer Sule assured the Chinese firm of prompt payment for the job, as according to him, he only agreed to undertake the project after money became available to pay off the contractor.

He appreciated God for giving him the opportunity to fulfill the promise he earlier made to the people, even as he lamented the deplorable condition of the stretch of the road linking Idadu with Agbashi.

The governor equally appealed to the contractor to ensure youths from the area are recruited to work on the project site.

Engineer Sule also assured the contractor of adequate security arrangements, in order to ensure none interruption of work while the project lasted.

He called on the people of the area to consider the project as their own and to support the contractor to deliver the job on time.

The governor assured them of timely completion of the project similar to the 25km Mararaba/Udege road, in Nasarawa West senatorial District, as well as the 15km Sisin-Baki/Farin Ruwa road in Nasarawa North.

Engineer Sule used the opportunity of the event, to called on Fulani herders in the area to desist from grazing their cattle along the Benue border, in order to avoid conflicts, while also urging them to totally avoid encroaching into farm lands belonging to local.

Commenting on the request by the Doma Local Government Chairman, Architect Ahmed Sarki, for the rehabilitation of the road linking Doma with Idadu, the governor promised to approach the Federal Government, with a view to rehabilitating the road.

Representative of the Road and Bridge International Nigeria Limited, Wan Zen Jin, thanked the Nasarawa State government for finding his company worthy of handling the project.

Jin said his company, established in 2008, is determined to deliver not only top quality jobs but also deliver benefits to both states and local governments.

He explained that, so far, the firm has handled similar projects in three states of Kano, Bauchi and Niger, with the project in Nasarawa State representing a milestone in the career of the company.

Jin assured that the company will join hands with the state ministry of works to deliver quality job on agreed date for the benefit of the community.

He however pleaded for maximum cooperation from the local community, as well as for adequate security, in order to quarantee smooth progress of work.

Also speaking, Chairman, Doma Local Government Area, Architect Ahmed Sarki Usman, thanked the governor for keeping to his promise, stressing that, Engineer Sule has successfully demonstrated that he is a man of his words.

Architect Sarki however appealed to the governor to rehabilitate the road linking Doma with Idadu, in order to ease the hardship experienced by commuters.