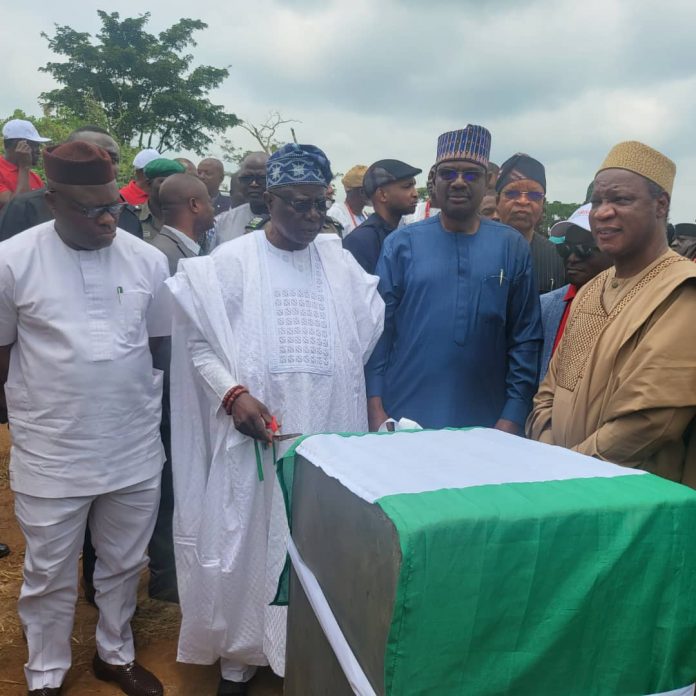 The federal government has begun the construction of a 132 kilovolts transmission line, a 2 X 60MVA transmission substation, and a switching station in Ekiti state to raise the state’s capacity by 204 megawatts (MW).

The Minister of Power, Engr. Abubakar D. Aliyu, during the groundbreaking ceremony in Ado Ekiti on Wednesday, said

General Manager, Public Affairs,
Transmission Company of Nigeria (TCN), Ndidi Mbah in a statement said, the project consists of a 50 kilometre stretch of 132kV transmission line from Ikere (Ado Ekiti) with a turn in – turn out at Ijesa Isu that terminates at Ilupeju Ekiti.

It also has a 2X60MVA, 132/33kV transmission substation with four line bays at Ijesa Isu Ekiti with a switching station at Ikere (Ado Ekiti) in the state.

The Minister who was represented by the Managing Director and CEO of the Transmission Company of Nigeria, TCN, Engr. Sule Ahmed Abdulaziz, said: “For TCN, this is a very strategic project and we believe it will have a massive impact on bulk power transmission in Ekiti and environs.

“The projects are part of the many projects being undertaken by the Transmission Company of Nigeria in pursuit of its grid expansion programme which is in line with Mr. President’s mandate for the expansion of the Power Sector for sustainable development.”

The Minister said in various transmission regions nationwide, TCN is equally executing substations and lines projects which are all at various stages of execution.

“These are a clear indication that the Federal Government is not relenting in its determination to ensure that the nation’s power sector receives the desired boost.

“For the residents of Ekiti State and its environs, the additional 204MW capacity to the grid means that more bulk supply will be readily available for offtake by Benin DisCo for its customers in Ekiti and environs,” he noted.

The substations’ project will also take care of suppressed load in this axis and relieve the Ado-Ekiti substation which has been overburdened to ensure a more reliable electricity supply to the people of Ekiti, he added.

The Minister also called on Ekiti residents to support the government efforts against vandalism of power facilities, saying, “We must demonstrate our collective responsibility toward preserving the nation’s power equipment in and around our communities so that the government can concentrate on its grid expansion initiative instead of wasting funds replacing vandalized power infrastructure.”

In his remarks, the Governor of Ekiti State, Kayode Fayemi said, the state receives just only 26MW of electricity from the national grid.
“This level of electricity supply is worrisome and grossly inadequate going by the energy need of our population, estimated to be around 150 megawatts in 2014. Beyond this intolerable level, the quality of the electricity supply is grossly below standard due to non-availability of adequate 132/33KV transmission line and the associated equipment that can help improve the quality of power to be delivered to our people, especially those in the Interior and the rural areas,” stated Fayemi, represented by his deputy.

The governor said although, the project is one of the Federal Government awarded contracts, “for us as a state, the project, when completed will complement the plans of the Ekiti State Government at improving the quality of energy supply to the 16 Local Government Areas of the state.”