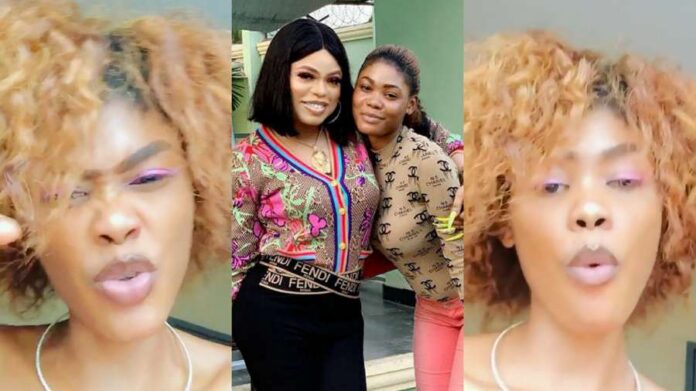 Bobrisky’s former ivorian PA, Oye Kyme has made more shocking revelation against the crossdresser in a new video on social media.

The Ivorian lady said she used to shave Bobrisky’s chest and wear him pampers.

This is coming after the crossdresser denied the allegations of assaults laid against him by the lady. He emphasized that the claims were all made up to blackmail him.

However, Oye Kyme is not backing down in exposing the crossdresser. She said Bobrisky’s lifestyle is fake and not as true as what he shows off online.

She also disclosed that Bobrisky has not been able to sleep in his house because of the bad plumbing issues.

She mentioned that he refused to help his elder brother and made him serve and follow him “like goat”.

Kyme advised him to start helping his family including his father who’s in the village.

According to her, she was more like a nanny to Bob because she was saddled with the duties of helping him get dressed, eat, wear him pampers, and also shave his hairy chest.

New JTF Commander Urges Troops To Brace-up Ahead Of Elections

Kaigama To Christians: God’ll Meet You In Darkest Moments