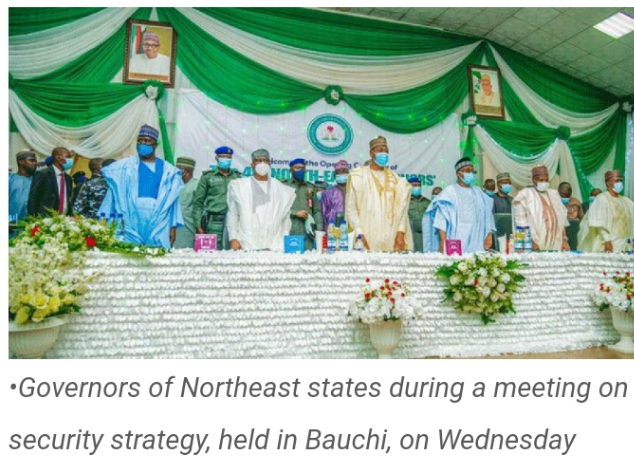 Northeast Governors have demanded new strategies from Service Chiefs in combating the growing insecurity in the nation.

The demand was made during the fourth meeting of the Northeast Governors’ Forum in Bauchi, yesterday.

TheFact Nigeria reports that the governors bemoaned the current security situation in the country, that seemed to be defying solutions, and its adverse effect on virtually all aspects of the nation’s lives.

The governors also revealed the possibility of establishing a joint security outfit among the states of the Northeast to mitigate the prevailing security challenges.

In his speech at the opening ceremony of the meeting, the Chairman of the Forum and Borno State Governor, Prof. Babagana Zulum, said: “In our previous meetings, we have been able to identify most of the daunting challenges facing us, individually and collectively, and the possible courses of action which we would pursue through shared responsibility and commonality of purpose, in order to arrive at the desired outcomes.”

“These challenges”, he said, “range from the seemingly unending issue of insecurity to deep-seated and pervasive poverty, from banditry and kidnapping to cattle rustling, from gender-based violence to youth restiveness.”

Zulum while lamenting that challenges seemed to be endless, said the possibilities of overcoming them equally was endless by the very fact that they had been identified. He said it was an indication that the region was on the right track to overcoming them.

He however said with the appointment of the new Service Chiefs, a new set of strategic initiatives is expected to be deployed to combat the security challenges.

Zulum, while lamenting that the insurgency was now taking a new turn for the worse with renewed spate of attacks on soft targets and innocent civilians, said “we shall be expecting a significant improvement in the security situation in the sub region and the country at large.”

He added: “As it is now, especially in Borno State, violence, being perpetrated by the insurgents, seems to be on the increase, both in scope and viciousness, and it has become a matter of tactical necessity for the new Service Chiefs to devise new and offensive strategies to counter the current attacks and forestall any future attacks.”

He acknowledged that the commitment of the military to the war against the insurgency remained unquestionable and “their determination to succeed is undeniable, as they have considered and acted upon a full range of options to deal with the insurgency.”

“However with the current escalation of deadly attacks by the terrorists, the various courses of action being pursued seem to have some limitations in terms of the expected impact; hence the need for a new set of pragmatic and result oriented initiatives to completely subdue the terrorists and ultimately end the insurgency.

“On our part, in addition to the logistical and financial support we have been rendering to the armed forces in their fight against general insecurity in the sub-region, we should also look into the possibility of forming a security outfit, within the ambit of constitutional precedent and operational feasibility, as has been done in other parts of the country. If and when we decide on a regional security outfit, the vigilante groups and civilian JTFs in our respective states may form the basis for the outfit.”

He added that efforts must be made by the governors to bridge whatever gaps exist in thier respective states in collectively addressing the security challenges.

Gov. Zulum also lamented that the issue of de-radicalization of Boko Haram terrorists or Safe Corridor Initiative have not yielded the desired expectations.

“Quite often, those who have passed through the Safe Corridor Initiative or have been de-radicalized, usually go back and rejoin the terror group, after carefully studying the various security arrangements in their host communities, during the reintegration process. In addition, the host communities where the reintegration process is going on, usually resent the presence of Boko Haram terrorists, even if they have been de-radicalized, because of the despicable and atrocious activities they have committed in the past”, he said.

He therefore called for a review of the de-radicalization initiative currently being implemented, “because the main goals and the underlying objectives behind the initiative are not being achieved”, and that, “the best option is to immediately prosecute the terrorists, in accordance with the Terrorism Act.”