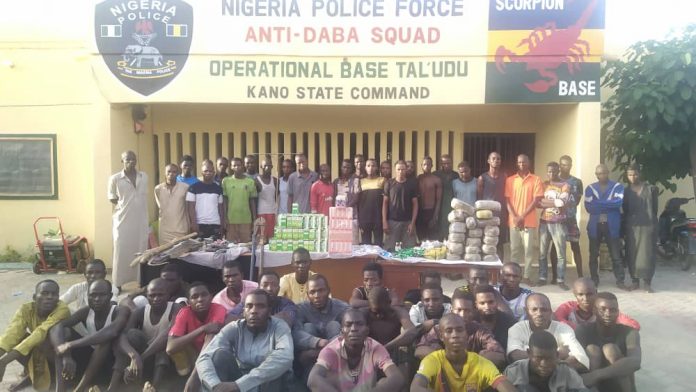 No fewer than 51 suspected armed robbers and drug dealers have been arrested in Kano by Police operatives in their Clearance Operations.

According to the State’s Police Public Relations Officer, PPRO, DSP Abdullahi Haruna Kiyawa, who disclosed this in a statement issued on Tuesday, the Clearance Operations are in line with the directives and guidance of the Inspector General of Police, IGP Alkali Baba Usman, on Community-based policing, as well as the Command’s efforts to rid Kano State of all forms of crimes and criminality, especially the menace of thuggery, drug abuse and other social vices.

All the suspects, who are resident within the State Metropolis, were found in possession of dangerous weapons and large quantities of illicit drugs.

Following the arrest of the 51 criminal suspects, a victim of an armed robbery attack sometime in April, and who had been stabbed in and robbed of several of his belongings including HP Computer, Acer Mini Laptop, 2 Hauwei GSM handsets, a Plasma LG television, 2 flash drives, other documents and a cash sum of One Hundred Thousand Naira, identified one Abdullahi Musa, of the same address with the victim.

On investigation, the suspect confessed that he spearheaded the April armed robbery, operation. The confession led the operatives to the arrest of two members of his syndicate, Umar Suleman, aged 20 years, and Suleman Mustapha, aged 22, as well as two receivers of the stolen properties.

Upon further discrete investigation, one of the receivers of the robbed properties, Garba Moh’d further confessed that he transported about one hundred mobile phones to Niger republic. Similarly, Musa Sunusi, another receiver if the robbed items, confessed to have bought nine mobile phones from the armed robbers.

All suspects confessed to their offences and will be charged to court on completion of investigation.

On preliminary investigation, the suspect confessed that the cartons of the milk were sent to him by his father from Lagos. The suspect as well as exhibits recovered were handed over to the Kano State Consumer Protection Council, KSCPC, for discreet investigation.

Meanwhile, the Commissioner of Police, Kano State Command, CP Sama’ila Shu’aibu Dikko, has called on all criminals including drug dealers to repent, or leave the State completely, or face the consequences of arrest and the full wrath of the law.

He thanked the good people of Kano State for their continuous support and cooperation, while urging residents to pray for the State, and the nation, as well as report incidences to the nearest police station, and desist from taking laws into thier own hands.

He assured that Rigorous Patrol and Raids of criminals’ hideouts and black spots will continue throughout the State, as the Command is resolved to sustain the tempo in ensuring safety of lives and properties.