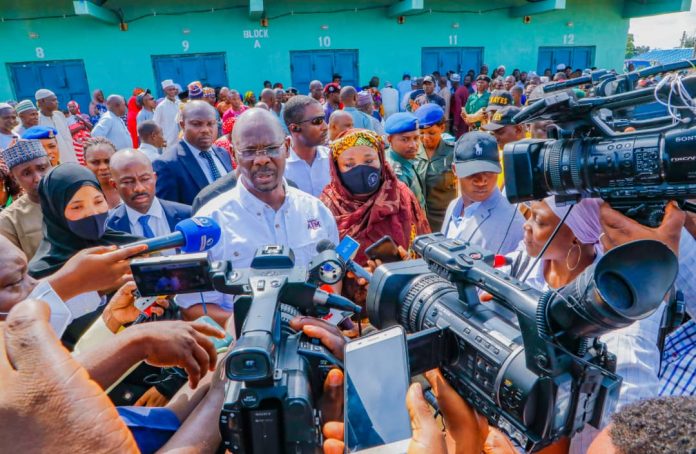 Speaking to journalists shortly after casting his vote, Engineer Sule however apologized to voters that turned up for the exercise, for the delay being experienced in conducting the elections in parts of the state.

TheFact Nigeria reports that the Governor blamed logistics issues, as well as the antics of some unpatriotic elements disrupting the distribution of election materials, stressing that his administration was committed to conducting a credible, free and fair elections.

While commending the Nasarawa State Independent Electoral Commission (NASIEC), for their efforts towards the conduct of the exercise, the governor noted that, delays experienced in commencing the elections in some parts of the state was due to challenges of logistics.

“We want to apologize to the people that come out to vote, because if there are delays, it affects them morally,” he said.

Explaining why he is voting around 2pm, Engineer Sule said he deliberately refused to be given special consideration, while some polling units are experiencing delay in the conduct of the election.

He specifically instructed NASIEC to ensure materials are distributed to other polling units before that of his polling unit.

The governor confirmed that the council polls commenced around 11am in some parts of the state, such as Nasarawa, Karu, Akwanga and Wamba local government areas, adding that election has been ongoing smoothly in other parts of the state.

Engineer Sule reassured that the election will be conducted transparently and with the fear of God.

He equally commended the peaceful nature of the exercise but however disclosed that four persons, including a chairmanship candidate of an opposition party, were arrested in Wamba Local Government Area, for ballot box snatching.

The governor further disclosed that the suspects have since been handed over to the police in Lafia, for proper investigation.

He emphasized that, in spite of attempts to disrupt the smooth conduct of the exercise by some disgruntled elements, his administration is committed to conducting the local government elections, in order to satisfy the yearnings of the people to elect leaders at the third-tier of governance.