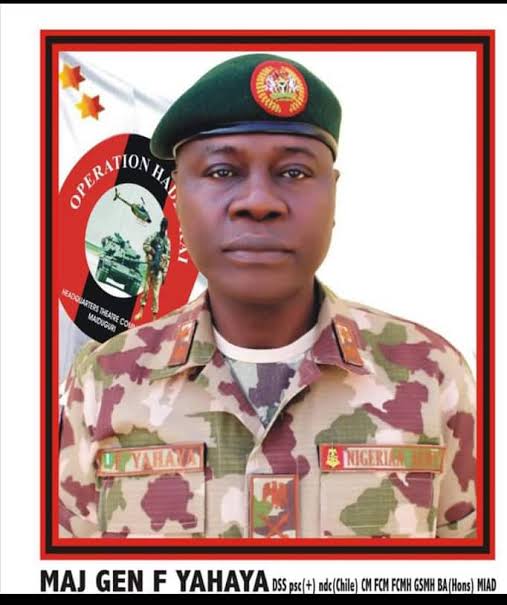 President Muhammadu Buhari on Thursday, appointed Major General Farouk Yahaya as the new Chief of Army Staff, COAS, who takes over from Late Ibrahim Attahiru who died in a plane crash in Kaduna State alongside other 10 officers.

Yahaya, who is a member of the 37 Regular Course of the prestigious Nigerian Defence Academy NDA, started his cadet training on 27 September 1985 and was commissioned into the Nigerian Army Infantry Corps on 22 September 1990.

Major-General Farouk Yahaya was the General Officer Commanding 1 Division of the Nigerian Army and handed over to Major General Usman Mohammed in April 2020 when he was appointed the Theatre Commander of Operation Lafiya Dole, OPLD, in Maiduguri, the Borno State capital.

Until his appointment as the new Chief of Army Staff, Yahaya was the Theatre Commander of the Counter terrorism Counter Insurgency military outfit in the North East code named Operation HADIN KAI.

Yahaya hails from Zamfara state and is married with children.