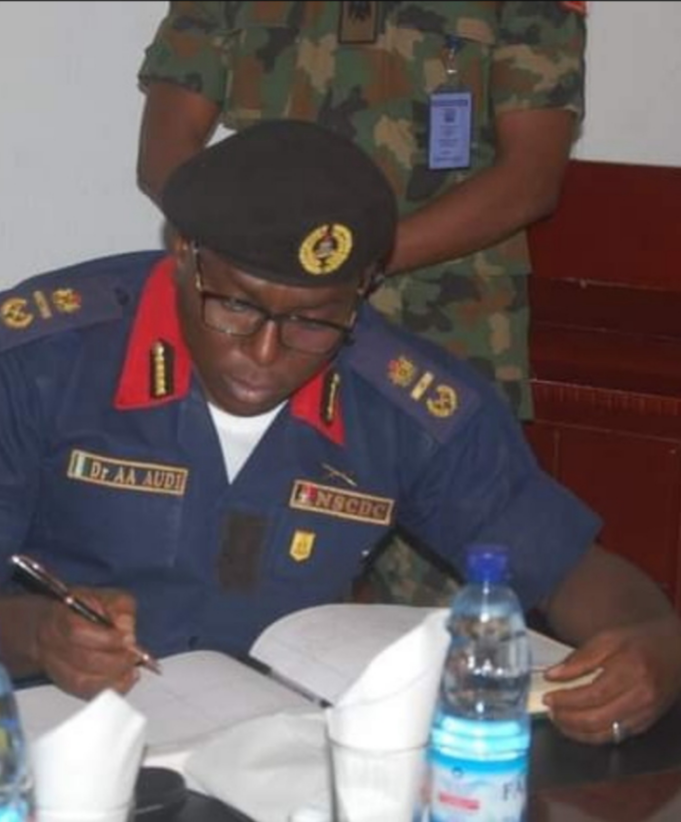 He attended the Senior Executive Course No. 38, 2016, which conferred on him the prestigious honour as Member of the National Institute (Mni) from the Nigeria Institute of Policy and Strategic Studies, kuru, Jos.

Education
Dr. Audi began his educational pursuit at Kofar Kudu primary school, in Nasarawa town of Nasarawa state, from where he got his First School Leaving Certificate in 1981.

He proceeded further to Government Teacher’s College, Jengre, in Plateau State and obtained a Teacher’s Grade II Certificate in1987.

In 1992, he obtained Nigeria Certificate in Education (NCE) from College of Education, Akwanga, Nasarawa State.

Dr. Audi has two Bachelor’s degrees: the first, in Physical and Health Education PHE, from the Ahmadu Bello University (ABU) Zaria, which he obtained in 1995, and the second, in Public Administration from Nasarawa State University, Keffi, obtained in 2019.

He also has two Master’s degrees: one in Public Administration, from University of Calabar, in 2001, the other, in Law Enforcement and Criminal Justice, which he obtained from ABU Zaria, in 2019.

The New NSCDC CG is a Ph.D holder in Public Administration with specialization in Public Policy Analysis from Nasarawa State University, Keffi, obtained in 2014.

Career Path
A thoroughbred professional and well-trained officer of the Nigeria Security and Civil Defence Corps, Dr. Audi has served the paramilitary agency of government in several capacities. His Public Service career started after the expiration of his National Youth Service (NYSC), when he joined the service of the Nigeria Security and Civil Defence Corps in November 1996. As a volunteer was deployed to serve as a Divisional Officer in Obi Local Government Division, Benue state after his Basic Training in 1997 and served there until April 1998.

He was redeployed to Lafia Division as the Divisional Officer, and served there until 2000. In July 2000, he was the Acting Head of Operations, and from May 2001 to October 2002, he served as Head of Intelligence. By November 2002, Dr Ahmed Audi was Appointed Head of Administration and Command as 2i/c to Yobe State command until 2007. He also served as Area Commander, Area ’B’ Potiskum Area Command in Yobe State from April to August 2007.

Worthy of note is the fact that His exemplary service, dedication to duty and demonstration of excellent leadership qualities, earned him a nomination for a Policy and Strategy course at the National Institute for Policy and Strategic Studies, Kuru, Jos by the Leadership of the Corps. Consequently, after his training as a Think-Tank Policy strategist at the National Institute, he was posted to bring his wealth of experience to bear, as the Provost of the NSCDC Training College in Katsina, from December, 2016 to October, 2018.

Until his appointment as Commandant Genaral of Nigeria Security and Civil Defence Corps, Dr Audi was the Zonal Commander, NSCDC Zone ‘C’ Headquarters Bauchi, in charge of North-East States.

Professional Affiliation
Dr Audi is a member and fellow of several professional bodies, notable among which is, Fellow, Institute of Security and Forensic Studies, Nigeria.

Professional Courses
Dr. Audi has passed through the crucibles of Civil Defence Corps having attended several local and international training and Management Courses, some of which include:
– Modern Tactics and Techniques in Disaster Management course in Russia (2012),
– Combating Corruption in Procurement Practice Course in Dubai (2008),
– Senior Management Course in Prisons Staff Training College, Lagos (2006) and
– Arms and Weapon Handling Training Course in National Intelligence Agency, Abuja (2012).

Professional Awards
Dr Audi’s doggedness, dedication and commitment to service has earned him several professional merit awards, one of which is the distinguished Merit Award for Excellence in Administration and Security Operations, awarded by the Institute of Industrialist and Corporate Administration of Nigeria.

As a member of the National Institute (Mni), Dr. Audi is also a motivational speaker who has presented several conference and workshop papers and has also published several peer reviewed journals as a result of his intellectual disposition.
He is an astute scholar, a versatile Civil Defender, reliable servant leader, an embodiment of competence and an enthusiastic person who is poised and able to take on any management and leadership role. He possesses extensive experience in supporting, developing and motivating teams to do better and to drive continuous improvements across a range of work activities. He also has a track-record of coming up with practical improvement initiatives to enhance organizational overall effectiveness and reinforce the latent potentials of its workers.

Dr. Ahmed Abubakar Audi is married and blessed with children.