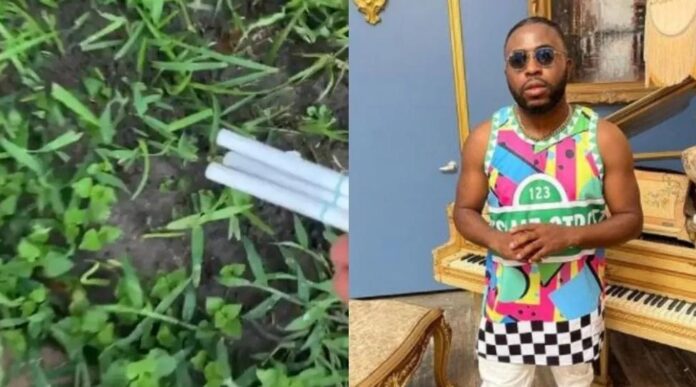 Popular Nigerian music producer, Samuel Oguachuba professionally known as Samklef has gotten fans talking after he revealed that he is quitting smoking.

The producer via a video shared on his social media page disclosed that he has been in a toxic relationship with cigarettes and has decided to cut off ties with it.

He indicated that he made up his mind to quit smoking 4 to 5 days ago.

To show that he is intentional
about quitting, he shared a video where he buried three sticks of cigarettes to bid farewell to smoke.

He accompanied the video with the caption: “Na like 4 to 5days ago I stop cigar. Toxic relationships Na him hard pass for this life. So i made up my mind cause everything happens in your mind. Now I’m free from all toxic relationship. Rip cigar once more.”

However, some of his fans have disregarded his motive to quit cigarettes adding that it will last for a short period.

At the same time, some were excited, saying he decided to turn a new leaf because of what happened to Davido’s close associate, Obama DMW.

iamterryg: But no be the full pack na Klef

mcmakopolo1: Wetin happen to the remaining pack na only 3 u separate from

official_ikechukwu: I tell u dat day for ur house nau. U and cigarette must end. U see am . God is good

fliptyce : Lol. No be so o. U go Deal with the trigger first.

tiyopeeblack: I don stop cigar since 2018 it has been one of the best decisions I made but i still dey smoke Igbo o

Minister To MSMEs: Be Relentless In Pursuit Of Excellence

Obasa Praises LASUBEB, Urges Board Not To Relent