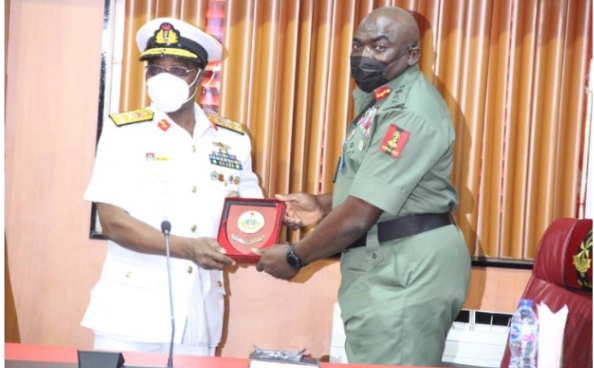 The Chief of Army Staff, COAS, Lt Gen Ibrahim Attahiru, has assured the Commandant of the National Defence College, NDC, of his total support and cooperation for the development of the College into a world Class standard.

Attahiru gave the assurances to the College Commandant, Rear Admiral Oladele Bamidele Daji, who led a delegation of the College, on his maiden visit to the COAS on Tuesday at the Army Headquarters, Abuja.

Rear Admiral Daji, who disclosed that he was at the Headquarters to identify with the COAS and to solicit for his support in the area of direction, consultation and infrastructural development, expressed confidence that the College will benefit immensely from the army chief’s support in the areas of concern, considering that he (COAS) is a member of the College Governing Board.

According to Daji, the Nigerian Army, NA, is one of the critical and major stakeholders of the College, hence the need to seek for her special intervention for the provision of desired infrastructures that were hitherto lacking to turn the College into a World class standard.

The Commandant also intimated the COAS that the College was adequately equipped to carry possible researches in peace and conflict resolution as well as other areas of high interest. 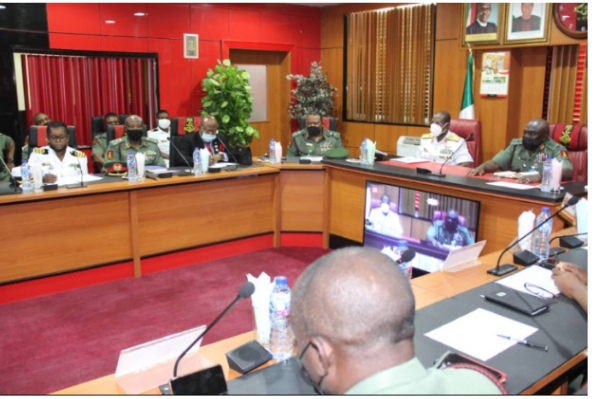 He further disclosed that the current NDC course 29 whose participants are drawn from different parts of the world including Nigeria will soon embark on a world tour to broaden participant’s knowledge on other countries’ military and strategic command style with a view to boosting human capacity development in the Armed Forces of Nigeria. Some of the places he planned to visit include Africa, Europe, America and Asian countries.

He assured the COAS of the College’s adequate and qualitative training and other studies for the personnel of NA as well as other Armed Forces.

The Commandant also congratulated Lt Gen Attahiru on his appointment as the 21st COAS, which he said was a deserving one, and described his leadership skills as unique and exceptional.
He added that the Army under the command of Gen. Attahiru has recorded huge successes so far in the fight against Boko Haram/ISWAP terrorists in the North East and other security challenges in the country.

He also invited the COAS to take the honor in delivering the Chief of Army Staff Paper to participants of NDC Course 29 which comes up in May, 2021.

In his remarks, the COAS Lt Gen Ibrahim Attahiru congratulated the Commandant NDC on his appointment which he said comes with enormous responsibilities, adding that he has been keeping abreast with the developmental strides in the College.

Having assured of his total support for the development of the College, Attahiru thanked the institution for the training of military personnel which it had undertaken over the years.