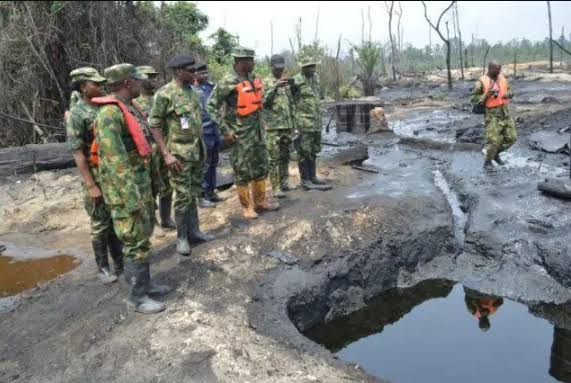 The Nigerian Navy, NN, said, it has recovered N24bn worth of crude oil in its continued fight against oil theft in the last three months of the activities of OPERATION DAKATAR DA BARAWO, OPDDB.

TheFact Daily recalls that the Navy, within its first thirty days of operations, which began in the month of April, successfully denied oil thieves the sum of N10.7bn.

According to Ayo-Vaughan, the feat recorded by the Navy in the month of June was achieved through the various Areas Of Operations (AOOs) of OPDDB.

Collectively, between 1 and 13 June, the efforts of NNS PATHFINDER in Port Harcourt, NNS DELTA in Warri and NNS SOROH in Yenagoa, saw the deactivation of 13 Illegally Refining Sites (IRSs), 6 reservoirs, 84 ovens, 107 storage tanks and 21 storage pits.

In addition to this, 5 suspects were arrested, 14 IRSs and 80 storage tanks were deactivated, 22 wooden boats, 40 ovens and two speed boats were also arrested and handled appropriately. 1 truck, 1 tanker, 1 barge and 1 Toyota Sienna, make up vehicles that were arrested as well.

Moreover, 14 IRSs were destroyed, 12 suspects arrested, 2 timber workers from Ogbia who had earlier been attacked, dispossessed of their sawing machines and abandoned in the bush by certain sea robbers, were rescued by NSS 028, under NNS SOROH, around Nembe axis.

Ayo-Vaughan disclosed that the duration of OPDDB has been extended by 30 days.