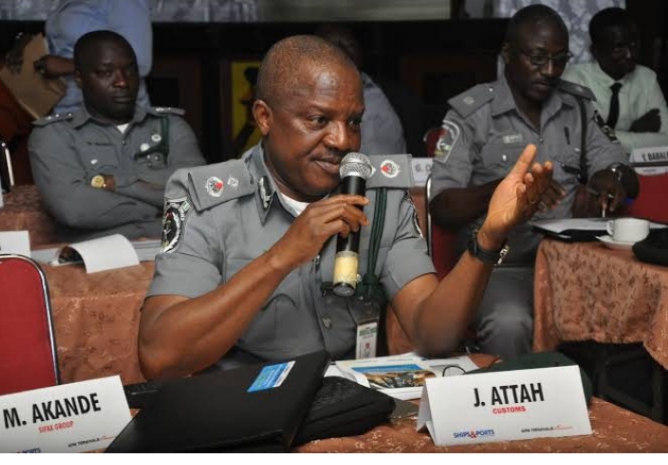 The Nigeria Customs Service NCS has reacted to what it considers a deliberate misinformation of the public, regarding payments of Customs duty, VAT and other charges like ETLS and CISS on imported commercial aircrafts and spare parts.
According to a statement issued on Tuesday by the Service’s Public Relations Officer, Mr. Joseph Attah, some sections of the media had quoted the Chairman of Air Peace Airline to have stated that NCS is still collecting duty and VAT in defiance of the Federal Government’s Executive Order on commercial airplanes and spare parts.

TheFact Nigeria reports that, the NCS in clarifying the issue, referred to Section 39 of the Second Schedule of the Finance Act as amended which states that “Airlines registered in Nigeria and providing commercial air transport services are entitled to duty-free importation of their aircrafts, engines, spare parts and components whether purchased or leased”.

The aforesaid did not grant concession on CISS and ETLS. The Act grants exemptions to Customs duty and VAT only.

According to the statement, “Such imports are therefore still required to pay appropriate charges on ECOWAS Trade Liberalization Scheme (ETLS) and Comprehensive Imports Supervision Scheme (CISS). It was therefore in-line with the extant regulations that NCS did not collect duty and VAT on Air Peace recent import of E195-E2 with registration No. 5N-BYE but restricted itself to the collection of ETLS and CISS which amounted to the sum of N189,000,000.

“NCS was therefore surprised to read from some national dailies quoting the Chairman of Air Peace accusing it of defying the Federal Government order, thereby “destroying airline business in the country”. This attempt at guilt tripping and threatening to shut down as a result of the presumed “service defiance” of FG Executive Order is most unfortunate and does not show proper understanding of the extant regulations governing one’s industry, which can also be construed as a deliberate attempt to blackmail the Service”.

The statement according to Attah further said that “the thinking that NCS can act in defiance of FG Order is far-fetched as our statutory function is to implement the fiscal policies of Government to the letter. On the off chance that this faux pas was as a result of a misreading of Government regulation, NCS wishes to advice Airline and indeed other industry operators to always engage the appropriate authority for proper clarification and necessary action, instead of resorting to self-help by using their obviously enormous visibility to gain public sympathy even when in contravention of extant laws”.

“As implementers of fiscal policies, we give assurances of our readiness to act in accordance with the principle and spirit of any Government directive concerning any industry in-spite of attempts to portray the NCS negatively in the public domain”, Attah stated.