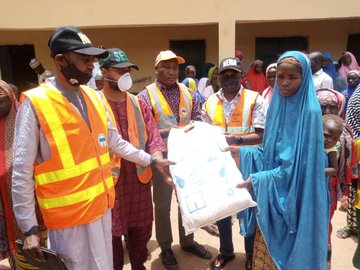 The distributed items included clothing, detergents and other household materials.

NEMA said that the distribution of the items was approved by the President, Muhammadu Buhari.

NEMA’s Director General, AVM Muhammed Mohammed (rtd) was represented by the Head of Sokoto Operations Office, Aliyu Kafindangi at the event which held at Gandi.

NEMA revealed the information on Tuesday on its official Twitter handle, @nemanigeria.

@nemanigeria wrote: “@nemanigeria has distributed relief items approved by the President, HE @MBuhari for persons affected by banditry in Goronyo and Rabah Local Government Areas of Sokoto State.

“@officialdgnema AVM MA Muhammed (rtd) was represented by the Head of Sokoto Operations Office Aliyu Kafindangi in flagging off the distribution in Gandi.

“The Sokoto State Government was represented at the occasion by Special Adviser to the Governor on Disaster Management Zubairu Albadau. Also present were the stakeholders. The items distributed directly to the beneficiaries were clothing, detergents and other household materials.”

Burna Boy Shows Off Mansion With Fish Pond In It